SEOUL, June 13 (Yonhap) -- First lady Kim Keon-hee has called for an end to dog meat consumption, saying South Korea and China are the only countries among big economies where people eat dog meat, according to a newspaper interview published Monday.

Kim, who lives with four dogs and three cats, made the appeal in an interview with the Seoul Shinmun newspaper, saying she wishes the government could achieve tangible progress in animal issues, including animal abuse and dog meat consumption.

"I believe the universal culture should be shared with developed countries because it can create negative sentiment against South Korea," Kim said of dog meat consumption.

"Not consuming dog meat is ultimately an expression of respect for man's best friend and it also means respect for life," she said in the interview, her first since President Yoon Suk-yeol took office last month.

Dog meat consumption can be put to an end through policies, such as providing support to help dog meat-related firms get out of the business, Kim said.

Dog meat consumption in South Korea has dramatically declined in recent decades amid perceptions that the tradition is becoming an international embarrassment. Still, advocates argue people should have the freedom to choose what they eat.

"About 15 million people have pets in our country. If order is established by strengthening the level of punishment for abusers, I believe we can become a mature society," she said. "After all, animal abuse and domestic violence are just different branches from the same stem."

Yoon and Kim are known animal lovers who raise four dogs and three cats, including five from animal shelters. Yoon had also said he will push for prohibition of dog meat consumption and toughen the penalty on animal abuse in his presidential election manifesto.

During the interview, Kim also recalled a conversation she had last month with U.S. President Joe Biden in which Biden said both he and Yoon had "married up."

"After understanding what he said right away, I said 'really?' in response," Kim was quoted as saying, adding that she wishes to be of help to her husband even though she has many shortcomings. 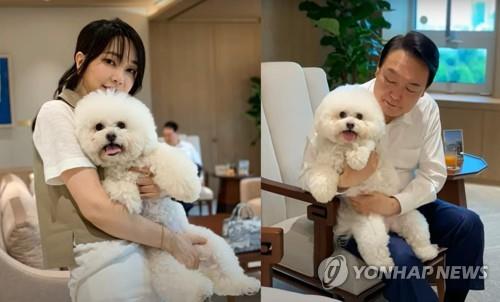