"We are thinking of making a law on blockchain-based platforms," Rep. Sung Il-jong of the PPP said during a party-government consultative meeting on virtual assets. "Some parts are mentioned in the special financial transaction law, but overall it's not organized."

The move comes after the crash of TerraUSD, known as a "stablecoin," and its sister coin Luna caused massive losses to many investors across the world and raised the need to better regulate the fast-growing market and protect investors from excessive volatility. 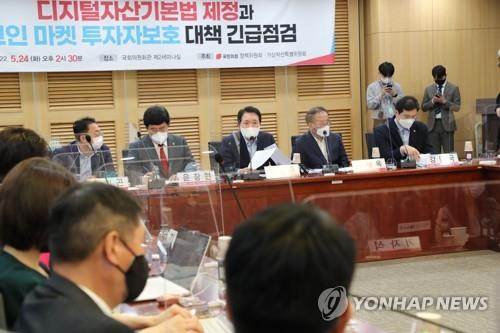 At the meeting, the PPP and government officials called for voluntary regulatory measures from the cryptocurrency industry.

"In order for the virtual asset market to have responsible growth, establishing a reasonable regulation system is important," Lee Bok-hyun, the chief of the Financial Supervisory Service, said. "But considering its complexity and unpredictable environment, setting a voluntary regulatory system through the active participation of private experts needs to be emphasized."

In response to such calls, the heads of five major cryptocurrency exchanges in the country said at the meeting that they will launch a joint consultative body to monitor compliance measures and the market situation.

They plan to set up standards for coin listing and delisting as well as for a trading warning system. They will also adopt a policy of conducting periodical risk assessment on cryptocurrencies and provide their findings to investors.

According to data from the Financial Services Commission, the size of the country's virtual asset market is worth 55.2 trillion won (US$42.9 billion), with daily trading value estimated to be 11.3 trillion won.