WASHINGTON, June 13 (Yonhap) -- South Korean Foreign Minister Park Jin and his U.S. counterpart Antony Blinken on Monday urged North Korea to refrain from staging additional provocations including a nuclear test, saying that they will only further isolate the impoverished country.

The top diplomats also said North Korean provocations will be met with a strong response.

"We affirm that any North Korean provocations, including a nuclear test, will be met with a united and firm response from our alliance and the international community," Park said in a joint press conference with his U.S. counterpart.

The Park-Blinken meeting, the first of its kind since the South Korean foreign minister took office last month, comes amid suspicions that North Korea may soon conduct a nuclear test.

Park said the North may have completed all preparations for a nuclear test and that only thing left now may be a "political decision."

Blinken agreed, saying, "We remain concerned about the prospects for what would be a seventh nuclear test over multiple administrations."

"We are being extremely vigilant about that," said the U.S. secretary when asked about the possibility of a North Korean nuclear test in the near future.

"We are in very close touch with our close allies and partners, starting with the Republic of Korea, also with Japan and others, to be able to respond quickly," he added, referring to South Korea by its official name.

Blinken said U.S. response to a North Korean nuclear test may include "short and longer-term adjustments to our military posture as appropriate."

The top U.S. diplomat reiterated that Washington remains committed to engaging in dialogue with Pyongyang.

"We urge the DPRK to refrain from further destabilizing activity," he said, referring to North Korea by its official name, the Democratic People's Republic of Korea.

"We call on the DPRK to engage in serious and sustained diplomacy, and indeed in that regard we are prepared, as we have been, to proceed with no preconditions," he added.

Blinken, however, also underscored the importance of keeping pressure on the recalcitrant country until it changes its behavior.

"Our goal, simply put, is a peaceful and stable region and world," he told the joint press conference at the state department. "Until the regime in Pyongyang changes course, we will continue to keep the pressure on." 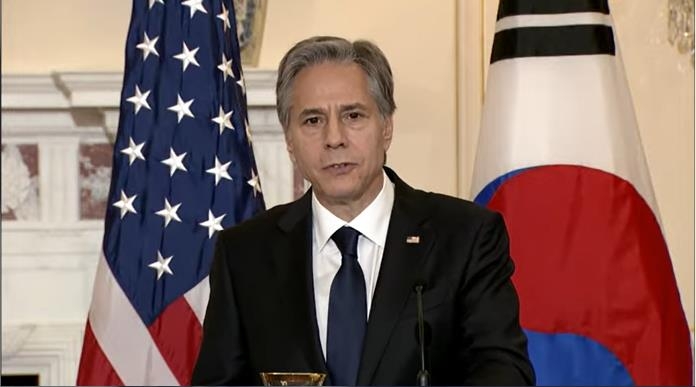 The South Korean diplomat also said he and Blinken have agreed on the early reactivation of high-level alliance dialogue on extended deterrence, known as Extended Deterrence Strategy Consultation Group (EDSCG).

"The EDSCG will serve as a timely and effective mechanism to discuss concrete extended deterrence measures, as well as to send North Korea a firm message," said Park.

He added the countries have agreed to reactivate the strategic dialogue at the earliest date possible "because it deals with Korean security, peace and stability, and also including the timely deployment of strategic assets when necessary."

The strategic dialogue between Seoul and Washington was suspended in 2018 amid the fervor of engagement with Pyongyang, which included three inter-Korean summits, as well as two historic U.S.-North Korea summits in 2018 and 2019.

North Korea has since avoided any denuclearization talks. It also remains unresponsive to any U.S. overture since the Joe Biden administration took office early last year.