An industry group representing some 70,000 shippers made the emphatic call as thousands of truckers have walked off the job in protest of a planned expiry of a freight rate system guaranteeing the minimum pay and other subsidies.

The strike, now in its eighth day, has caused major disruptions in cargo transportation and the production of goods in South Korea, with the steel, automobile and petrochemical sectors reporting at least 1.6 trillion won (US$1.23 billion) in damage.

"Key materials that should be supplied to each industry sector are not being delivered at the right time. Outbound shipments of goods across the country are being canceled and delivery failures continue to occur," the group said at a press conference organized by the Korea International Trade Association.

It pointed out that small and midsized exporters, ranging from raw material manufacturers to agricultural and livestock producers, could face mounting losses if the cargo disruptions continue, claiming that cases of even one or two shipping cancellations could deal heavy blows.

If the strike continues through this week, the industry could see many more companies shut down operations at their factories in days, which would eventually wreak havoc on subcontractors, the shippers said.

"We strongly urge the truckers to look from a broader perspective and return to work first, put the stalled transportation back on track and resume the negotiations for a win-win deal," the group said. 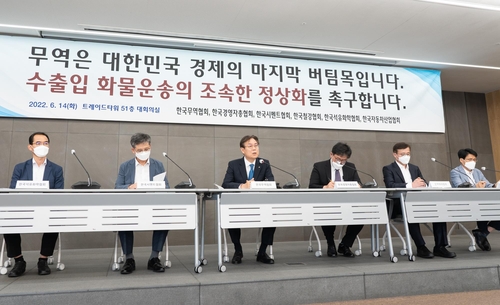 The 22,000-strong Cargo Truckers Solidarity is demanding the extension of a freight rate system guaranteeing minimum wages for truck drivers to cope with rising fuel costs.

The truckers and government have had four rounds of negotiations but have yet to reach a compromise.

The Safe Trucking Freight Rates System was introduced in 2020 for a three-year run, aimed at preventing dangerous driving practices, such as cargo overload, and guaranteeing minimum rates for truckers. The system is due to expire this year.

Shippers claim the system has done little to reduce work hazards but instead ended up jacking up transport costs by as much as 43 percent for short-term cargo transport compared with 2017.

They also say the freight system has raised the costs for various subsidies by up to 70 percent compared with five years ago.

Shippers call for an end to the freight rate system and creating new guidelines that will benefit both truckers and shippers.

As of 6 p.m. Monday, KITA had received 236 complaints from companies in connection with the strike, with more than 60 percent of the cases related to exports.

Supply delays accounted for the most, followed by shipping disruptions and the incurrence of contract cancellation fees. Importers lodged complaints about soaring logistics costs and production halts, the trade association said.

The petrochemical companies' association said the industry's average daily shipments had plunged by 90 percent because of the strike. The auto industry said it has been unable to produce some 5,700 vehicles due to a delay in parts deliveries.

South Korea's steel giant POSCO halted operations at some of its domestic plants due to the lack of storage for unshipped products.

Top automaker Hyundai Motor Co. said the protest has affected vehicle production at its five plants in Ulsan, some 400 kilometers southeast of Seoul. Most cement companies are being forced to cut their factory operations due to their storage units reaching full capacity. 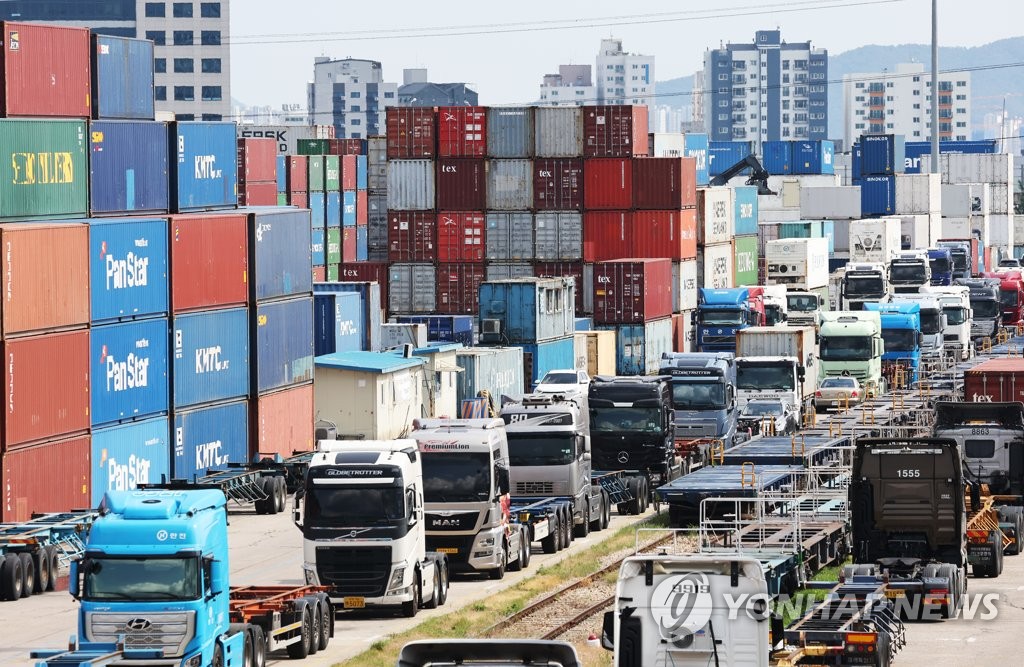