SEOUL, June 14 (Yonhap) -- South Korea's finance ministry and the central bank on Tuesday raised their guard against an increase in market volatility, as the financial market was hit hard by fears about the Federal Reserve's aggressive rate hikes.

Global financial markets have been roiled this week amid the growing prospect that the Fed may hike interest rates by a larger-than-expected margin of 0.75 percentage point this week to tame high flying inflation.

The government and the Bank of Korea (BOK) said they will closely monitor the financial market and "actively" step in to stabilize it when needed.

"The government needs to take actions to prevent market jitters from sharply rising due to excessive herd behavior in the FX market and review contingency plans that can be mobilized at any time," Finance Minister Choo Kyung-ho said at a meeting with senior ministry officials. 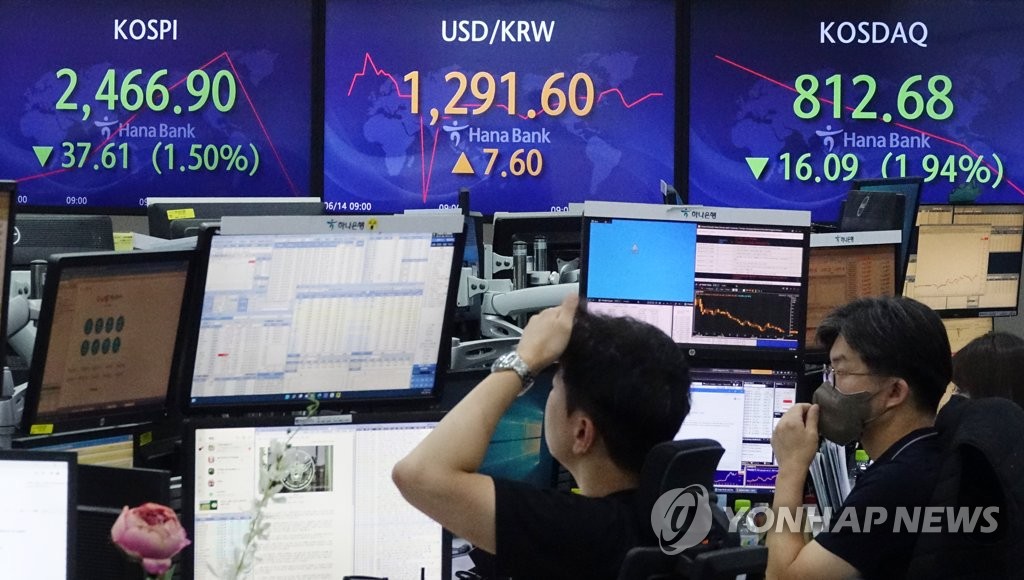 Fed Chair Jerome Powell earlier said the Fed would conduct a half-point "big step" rate hike in June and July. But the May inflation reading, the fastest in 41 years, prompted more investors to expect a 0.75 percentage-point "giant step" hike this week.

South Korea's stocks and currency continued to suffer losses Tuesday, as investors were gripped by concerns that the possibility of the Fed's bigger rate hikes could slip the U.S. economy into a recession.

South Korea's stocks and currency plunged Monday, with the KOSPI tumbling 3.52 percent. The local currency fell by 15.10 won per the dollar.

The won's slide has accelerated in recent months as the Fed rolled back pandemic emergency stimulus and kicked off monetary tightening. The won has declined around 7.6 percent against the dollar so far this year.

The finance ministry said Monday authorities will make efforts to prevent excessive one-sided movements by the won in a verbal intervention seen aimed at curbing the won's sharp fall.

The government also said it will closely cooperate with the BOK to stem a sharp hike in bond yields.

The ministry said it plans to buy back 3 trillion won (US$2.3 billion) of Treasury bonds this week, larger than its planned purchase of 2 trillion won, to help stabilize the bond market.

Returns on government bonds have spiked in recent months amid the BOK's monetary tightening and global rises in bond yields.