SEOUL, June 14 (Yonhap) -- President Yoon Suk-yeol declined to comment Tuesday on whether a North Korean nuclear test was imminent, as his top diplomat was in Washington to discuss the allies' response should the test occur.

Officials in Seoul and Washington have prepared for weeks against the possibility that Pyongyang will stage its first nuclear test since 2017 despite repeated warnings it would be met by a firm response from the allies.

Yoon was asked by a reporter as he arrived for work whether the test appeared imminent.

"That's a bit difficult for me to tell you," he replied.

North Korea has carried out a series of missile tests since the Yoon administration took office last month, including a test of an intercontinental ballistic missile.

After a meeting with U.S. Secretary of State Antony Blinken in Washington on Monday, Foreign Minister Park Jin said the two agreed to reactivate a high-level channel known as the Extended Deterrence Strategy Consultation Group at an early date, so that it could deal with Korean security issues, "including the timely deployment of strategic assets when necessary."

Yoon was also asked by reporters whether he has plans to appoint his nominees for education and health ministers if the National Assembly continues to delay the confirmation process.

On Monday, the president appointed the chief of the National Tax Service without a confirmation hearing after the deadline for the process passed.

"That's a hypothetical question, so it's difficult to answer, but for now, I plan to wait a considerable amount of time," he said. 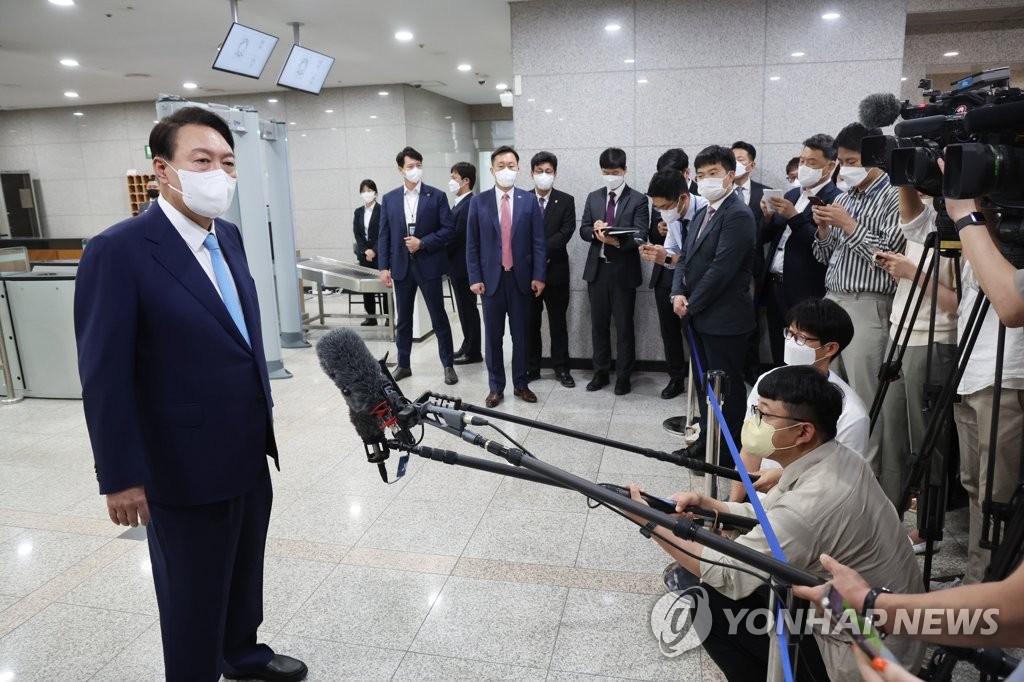 Yoon declines comment on whether N.K. nuclear test is imminent

Yoon declines comment on whether N.K. nuclear test is imminent