The Cultural Heritage Administration (CHA) and the Korea Cultural Heritage Foundation have held the Visit Korean Heritage campaign every year since 2020, as the global boom of Korean pop music, films and TV dramas has raised worldwide interest in Korea and its culture as a whole.

For this year, the organizers planned the same 10 routes that tourists are recommended to visit as last year. One of the routes newly included the former presidential office and residence, which was opened to the public on May 10 after President Yoon Suk-yeol moved out in line with his campaign to give the historic place to the public.

The site was used as the rear garden of Gyeongbok Palace during the Joseon Dynasty (1392-1910) and served as a major site of Korean politics for the past 74 years after the South Korean government was established in 1948. It now is emerging as a hot tourist spot in the capital city. 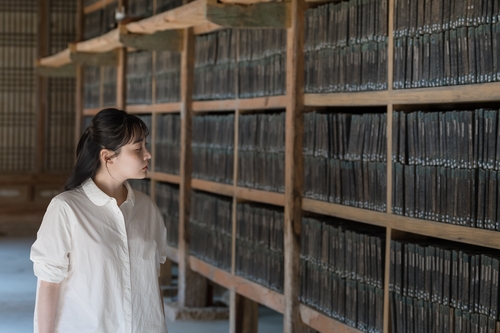 There will be a performance of diverse K-pop and traditional Korean music on Aug. 15 Korean Liberation Day and a media art show in October at Cheong Wa Dae as part of the campaign.

She traveled to Haein Temple in Hapcheon, some 240 kilometers south of Seoul, to film a video to promote tourism to the old temple famous for being the home of the Tripitaka Koreana.

The video will be released in the second half of this year and shown on a billboard at Times Square in New York City.

"I feel proud and pleased to be able to publicize Korean cultural heritage and its historical beauty," she said during a press conference in Seoul to promote the campaign. "It was my first time to visit Haein Temple. It was calm and magnificent, so I was able to get good energy." 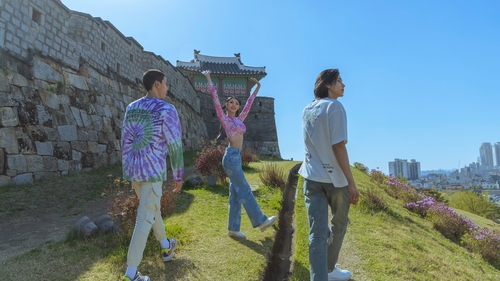 Videos of the siblings visiting various cultural heritage sites, such as Hwaseong Fortress in Suwon, Seongyojang in Gangneung and Hahoe Village in Andong will be released on the Times Square billboard and online on June 27. There will be a hide-and-seek event involving the three siblings hiding on Zepeto, the metaverse platform of Korea's tech giant Naver, according to the organizers.

"We used virtual influencers to better communicate with the MZ generation, and expanded programs and the number of places to visit," Choi Eung-chon, head of the CHA, said. "We hope Korean cultural heritage will be a warm comfort for domestic and foreign tourists, and a vital source of hope for the local economy."

More details about the campaign will be provided on its official website at www.chf.or.kr/visit.