SEOUL, June 14 (Yonhap) -- Parcel delivery workers under the national postal service said Tuesday they will launch a one-day strike later this week, demanding to scrap a new contract that does not guarantee job security for contract workers.

The Parcel Delivery Workers' Solidarity Union said its members affiliated with the state postal service, the Korea Post, will walk off the job Saturday and stage simultaneous sit-ins across the country starting Monday.

The union claims Korea Post has decided to halt its request to mediate the new contract for contract couriers that does not even guarantee the labor period of two years, possibly leading to easy layoffs. The contract will be adopted on July 1.

The union said it will call off the strike if Korea Post agrees to withdraw what they called the "slavery" contract.

The planned strike is forecast to further disrupt the country's logistics networks amid an ongoing nationwide walkout by unionized truck drivers.

Thousands of unionized cargo truckers have been on strike, demanding an extension of a freight rate system that guarantees basic wages for truck drivers struggling to cope with soaring fuel prices. 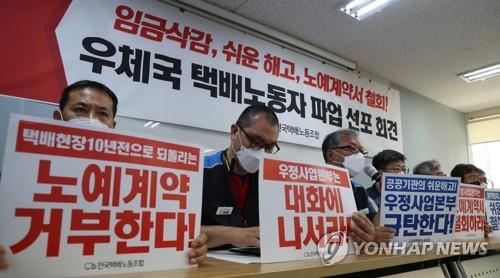