SEOUL, June 14 (Yonhap) -- South Korean stocks fell to a fresh 19-month low Tuesday to extend their losing streak to a sixth day as investors were wary of a larger-than-expected interest rate hike in the U.S. and a global economic recession. The local currency continued to slide against the U.S. dollar.

The market opened lower, tracking a sharp plunge on Wall Street, and had fallen by more than 1 percent during the session. But some of the losses were pared on bargain hunting before the market closed.

Eyes are on the Federal Reserve's two-day interest rate-setting meeting from Tuesday (U.S. time), as some forecast that the central bank would raise the key rate by 75 basis points to tame the surging inflation.

If the Fed does that, it would be the first time since 1994 that it raised the rate by three-quarters of a point at one time.

"But lowered corporate valuations appear to have limited a further drop, though volatility over global uncertainties and the strong dollar is expected to continue for the time being," he added.

As market rout deepened, the government and the Bank of Korea said they will "actively" step in, if needed, to stabilize the market.

"The government needs to take actions to prevent market jitters from sharply rising due to excessive herd behavior in the FX market and review contingency plans that can be mobilized at any time," Finance Minister Choo Kyung-ho said at a meeting with senior ministry officials. 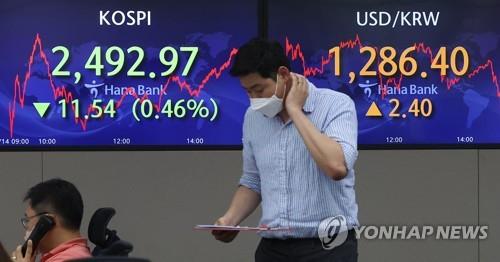 In Seoul, top-cap tech and chemical shares traded mixed, while bio and carmakers fell to drag down the index.

Major battery maker LG Energy Solution jumped 2.77 percent to 426,500 won after the company announced the plan to build a new plant in South Korea for the 4680 battery cells known for their wide use by Tesla Inc.

The local currency ended at 1,286.4 won against the U.S. dollar, down 2.4 won from the previous session's close.