About 20 liberal activists affiliated with YouTube channel Voice of Seoul began the rally around 2 p.m. on a road across the Acrovista apartment in the Seocho district, where Yoon's private home is located, demanding the president's apology over his recent remarks about anti-Moon rallies.

Moon and his wife, Kim Jung-sook, have reportedly been suffering from loud noise and abusive language from demonstrators, mostly conservatives, since arriving at their new home in a rural village of Yangsan, 420 kilometers southeast of Seoul, on May 11 after his retirement. The Moon family and many village residents lodged complaints against some demonstrators, but police have been criticized for not aggressively responding to the controversial anti-Moon rallies.

Apparently aggravating Moon's supporters, mostly liberals, Yoon said last week that rallies in front of Moon's home should be handled in accordance with the law just like rallies outside the presidential office. 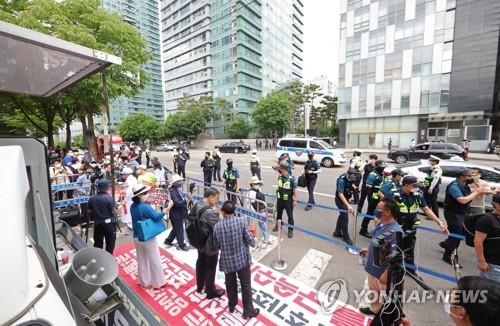 The Voice of Seoul protesters played loud songs or recordings of loud shouts and abusive language by anti-Moon demonstrators through large loudspeakers in front of Yoon's home. Some of them even beat "kkwaeggwari," a small brass gong used in Korean folk music.

They vowed to continue their rallies in front of Yoon's apartment 24 hours a day until anti-Moon rallies are stopped.

"President Yoon has made remarks apparently in support of demonstrators and their noise and abusive language (outside Moon's home)," Baek Eun-jong, head of Voice of Seoul, said.

"The incumbent president is supposed to play a role in resolving conflicts among the people, but he has rather shown behavior that incites such conflicts."

Voice of Seoul has previously made headlines after being sued by first lady Kim Keon-hee for broadcasting recordings of her phone conversations with one of its staffers last year.

About 20 conservative activists also held a rally outside Yoon's apartment to denounce the liberal protesters from Voice of Seoul, with some of them hurling curses at Baek.

Police issued a warning to the protesters at the scene after receiving complaints from residents in the district, saying the noise was in excess of the permissible levels.