In the rate-setting meeting held on May 26, the monetary policy board of the Bank of Korea (BOK) voted unanimously to hike the policy rate by a quarter percentage point to 1.75 percent.

It marked the third rate hike this year after 0.25 percentage-point increases in both January and April as the country grapples with rising inflation pressures amid soaring oil and commodity prices.

The latest hike decision was accompanied by the central bank's revision of its inflation outlook for this year to 4.5 percent from 3.1 percent projected three months earlier. The forecast, if proved, could be the fastest price growth since 2008, when prices grew 4.7 percent.

The minutes showed that a considerable number of the board members raised a need for further monetary tightening, hinting at another rate increase in July.

"The recent high inflation around the globe does not only come from a supply side but also from a demand pressure that exceeds the potential level following the operation of expansionary policies," an unidentified member was quoted as saying.

"We must prioritize stabilizing inflation expectations, and preemptively and consistently push ahead with a reduction in loose monetary policy."

Another unidentified member pointed out the U.S. Federal Reserve is accelerating the pace at which it tightens its monetary policy and that South Korea should also be ready to respond accordingly amid worries about a possible reversal of rates between the two countries that could prompt capital outflows from South Korea.

"The Fed's monetary policy normalization process is getting faster than what was expected a month or two earlier, and since its scale of adjustment can be bigger, we have to pay attention to the pressure on the foreign exchange sector and the possibility of restrictions on our monetary policy," the member said. 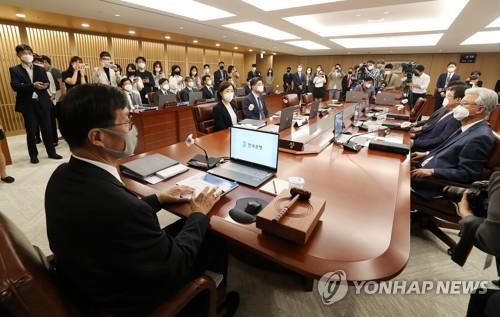