SEOUL, June 15 (Yonhap) -- A Seoul court on Wednesday denied an arrest warrant for former Industry Minister Paik Un-gyu over allegations that while in office he forced the heads of energy-related state firms to step down.

Paik, the former Moon Jae-in administration's first minister of trade, industry and energy, was charged with forcing the resignation of the heads of 13 state-run energy companies, who were appointed under the preceding Park Geun-hye government, shortly after he took office, between 2017 and 2018.

The Seoul Eastern District Court denied the warrant for Paik's arrest on charges of abuse of power, saying some allegations against him were open for dispute and that it is difficult to view him fleeing or destroying additional evidence.

"While in office, I handled my job in accordance with the regulation stated by the law," Paik told reporters before attending a court hearing earlier in the day.

As part of the investigation, prosecutors in May searched Paik's residence and his office, and the buildings of six energy-related state agencies affiliated with the ministry, and seized a computer and other materials.

The then main opposition Liberty Korea Party, a predecessor of the now-ruling People Power Party, lodged a criminal complaint against Paik, ex-Vice Industry Minister Lee In-ho and three other high-level ministry officials in 2019 in what is dubbed the "industry ministry blacklist" scandal. 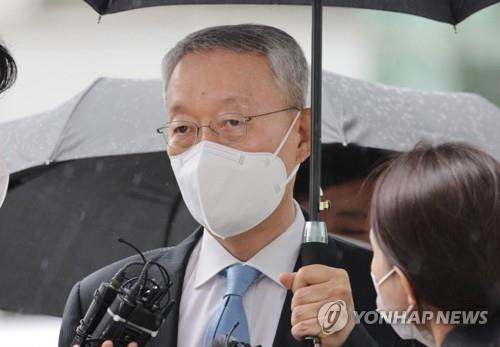