SEOUL, June 15 (Yonhap) -- President Yoon Suk-yeol defended his wife Wednesday after she drew criticism for taking a friend along on a visit to pay respects at a former president's grave earlier this week.

First lady Kim Keon-hee traveled to Bongha village, some 300 kilometers southeast of Seoul, on Monday to visit the grave of former President Roh Moo-hyun and meet with his widow, Kwon Yang-sook, at her home.

Photos later revealed that Kim was joined by other women on the trip, sparking speculation on who they were. The presidential office explained Tuesday that one was a university professor and longtime acquaintance of the first lady, while the others were presidential staff. 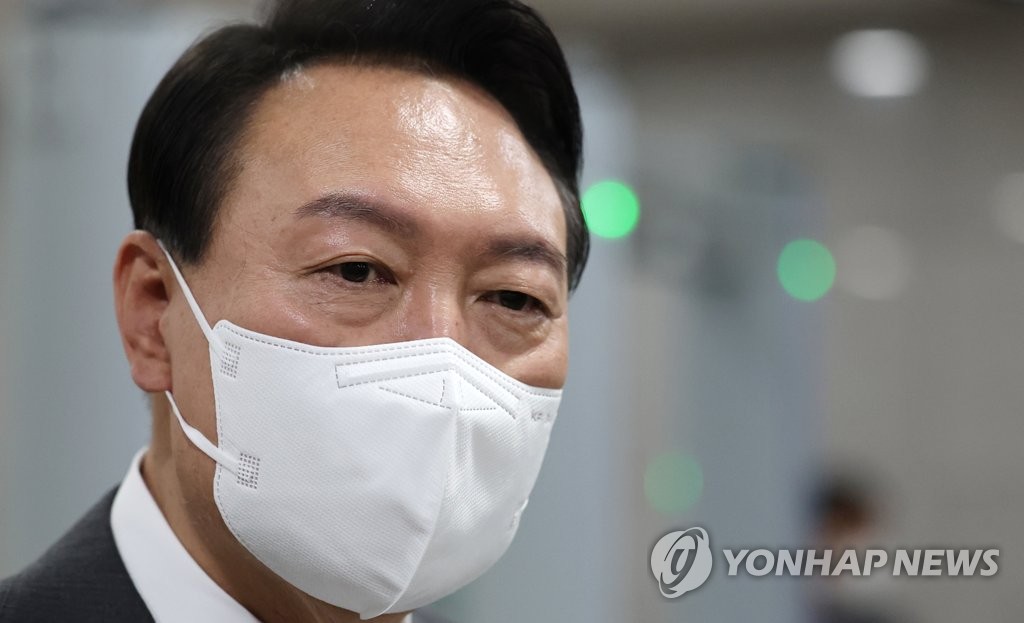 "I know the person who appeared in the photo, and she is a longtime friend of my wife from Busan," Yoon told reporters as he arrived for work. "It appears that when they went to see (Kwon), they brought with them a lot of bread and other stuff that she liked, and (my wife's friend) knew a place in Busan that's good at that and introduced it to her."

"Isn't Bongha village somewhere any citizen can visit?" he added.

The main opposition Democratic Party has accused the first lady of using a secret personal connection on an official visit.

Yoon admitted to reporters that he is unsure how to separate his wife's official activities from unofficial ones.

"It's my first time being president," he said. "It wasn't that long ago that I started, so I will listen to people's views and think about it little by little."

The president then asked reporters to propose solutions.

"She can't go around on her own because she doesn't have any formal detail or secretaries at the moment," he said.

The president has scrapped the presidential office previously responsible for handling the first lady's schedule in line with a campaign pledge.

Meanwhile, Yoon explained that his team had no choice but to postpone a decision on a new name for the presidential office because all five candidate names picked through a public contest received negative feedback in the press.

The presidential office announced Tuesday that the office will be called the Yongsan Presidential Office for now. Yongsan is the district of Seoul where the office is located.

Yoon also addressed the tit-for-tat rallies held outside his home in southern Seoul, saying, "It's the people's right under the law, so I won't comment on that."

The rallies were held in response to those by conservative activists outside the home of Yoon's predecessor, Moon Jae-in.