SEOUL, June 15 (Yonhap) -- Foreign Minister Park Jin's public talk about "normalizing" an intelligence-sharing pact between South Korea and Japan, imperiled over the past few years by history and trade disputes, is drawing both renewed optimism and skepticism over relations between the neighboring countries under the Yoon Suk-yeol administration.

After meeting with U.S. Secretary of State Antony Blinken in Washington D.C. on Monday, Seoul's top diplomat expressed a desire to normalize the General Security of Military Information Agreement (GSOMIA), thought to be underutilized in the wake of the previous Moon Jae-in government's decision in 2019 to "conditionally" put off its expiration.

Park's remarks have stoked hopes for a thaw in relations between the two sides, and for their stronger security cooperation amid rising North Korean threats. Still, doubts linger over the two countries' future collaboration when they are still far from addressing long-simmering history-related issues.

"We want GSOMIA to be normalized as soon as possible together with the improvement of the Korea-Japan relationship," he told a joint press conference. "In order to deal with the threat from North Korea, we need to have policy coordination and a sharing of information between Korea and Japan and with the United States." 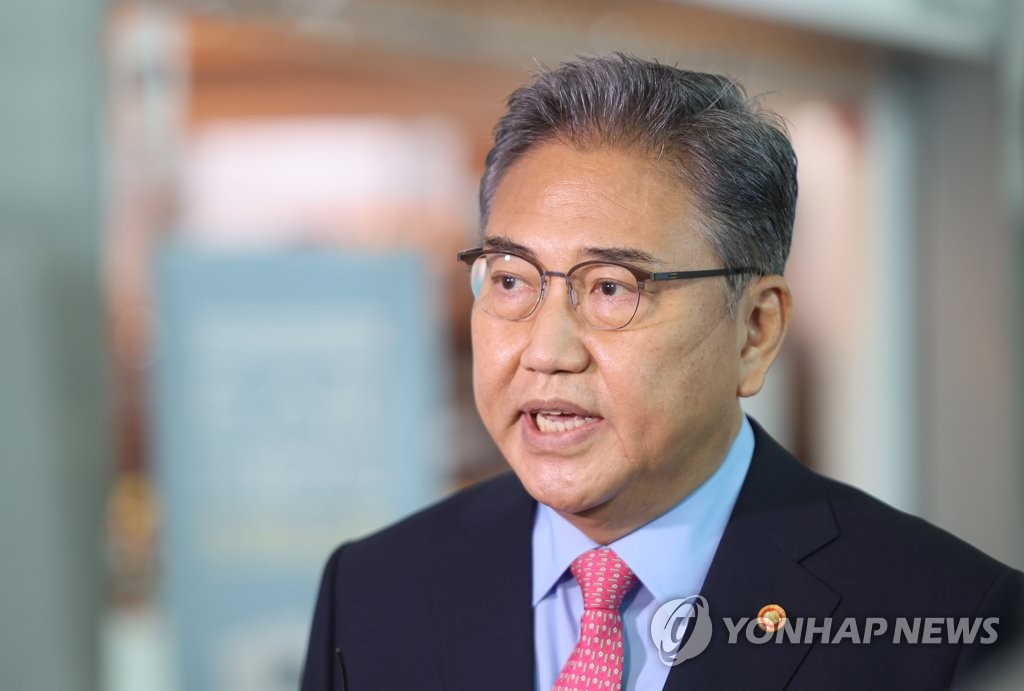 Signed in 2016, GSOMIA has been seen as a rare symbol of security cooperation between Seoul and Tokyo that have been mired in seemingly endless territorial and historical feuds stemming from Japan's 1910-45 colonization of the Korean Peninsula.

The fate of GSOMIA was thrust into doubt in August 2019 when Seoul decided to end the pact in protest at Tokyo's unilateral export curbs against Seoul, an apparent retaliation for the 2018 Supreme Court ruling ordering Japanese firms to compensate victims of wartime forced labor.

In a highly symbolic, and rather equivocal, move in November that year, however, Seoul suspended the decision, on a conditional basis, to terminate GSOMIA and indefinitely put off its expiration amid widespread speculation of diplomatic pressure by Washington that sees the pact as a crucial tool to facilitate trilateral security collaboration with its Asian allies.

The suspension has left the GSOMIA alive and allowed Seoul and Tokyo to share some major military intelligence, at least ostensibly. But the level, depth and frequency of intelligence-sharing must have been affected, many observers say.

A divergent analysis of the North's recent missile launches has added to that speculation. The South's military announced the North launched eight ballistic missiles on June 5. Japan initially said the North fired "at least six" missiles though it later revised the number to eight.

"Should the intelligence-sharing anchored in the GSOMIA pact be normalized, this would help expedite or catalyze security cooperation between the South and Japan and among the two countries and the U.S.," Nam Chang-hee, professor of political science at Inha University, said. "This could also help set the mood for the restoration of trust between Seoul and Tokyo."

The envisioned normalization of GSOMIA is in tune with South Korean Defense Minister Lee Jong-sup's weekend remarks on the Yoon Suk-yeol administration's desire to normalize security cooperation with Japan despite "unresolved" bilateral issues.

His remarks at the Shangri-La Dialogue, an annual security forum in Singapore, came as Seoul, Washington and Tokyo shared the growing need for deeper cooperation following the North's continued ballistic missile launches and speculation about the possibility of its nuclear test.

On the margins of the Singapore forum, Lee held trilateral talks with his U.S. and Japanese counterparts, Lloyd Austin and Nobuo Kishi, and agreed to hold trilateral missile warning and search and tracking exercises on a regular, more public, basis.

Despite such a move, questions keep arising over whether time is ripe for defense engagement with Japan.

South Korea and Japan are still caught in protracted rows over Japan's wartime forced labor, sexual enslavement of Korean women, its persistent sovereignty claims to the East Sea islets of Dokdo and its restrictions on exports of three key industrial materials essential for chip and display making -- photoresist, etching gas and fluorinated polyimide.

On the history issues, Tokyo has maintained that they were settled under a 1965 treaty that normalized bilateral relations or by a 2015 government-to-government deal on the so-called comfort women issue. In contrast, South Koreans believe Japan has yet to fully atone for its wartime atrocities, narrowing room for government officials and politicians here to take proactive measures to improve bilateral ties.

Apparently aware of doubts and skepticism, Choi Young-sam, spokesperson of Seoul's foreign ministry, said the minister's remarks on GSOMIA were his expression of a "basic" position on the need for smooth security cooperation with the U.S. and Japan to cope with North Korean threats.

"With that basic position and objective, our government, including the foreign ministry, will continue related efforts for communication with the international community, including Japan," Choi said.

What's brightening the prospects of cooperation between Seoul and Tokyo is Washington's drive to strengthen its regional alliance networks to deal with China's growing assertiveness and Russia' muscle-flexing and war in Ukraine, analysts said.

"The normalization of GSOMIA is, after all, an issue related to the South Korea-U.S. alliance," Park Won-gon, professor of North Korea studies at Ewha Womans University, said.