SEOUL, June 15 (Yonhap) -- Finance Minister Choo Kyung-ho said Wednesday that the government will use every possible policy measure to stabilize prices and people's livelihoods amid rising concerns of economic slowdown and higher inflation.

Choo made the remark at a ruling party-government consultative meeting on economic policy, asking for parliamentary support for efforts to overcome the economic crisis.

"We are in a difficult situation in many ways, but the government will use every possible policy measure to respond to the priority of stabilizing people's livelihoods and prices, while making efforts to improve growth potential," he said.

The meeting came a day before the new government of President Yoon Suk-yeol unveils its economic policy direction.

Choo said the Yoon government's economic policy roadmap will focus on four aspects: shifting the axis of economic management from the government to the private sector; pushing structural reform in five areas including labor, education, finance; preparing for structural changes in the future including population crisis; and reinforcing the social safety net for vulnerable people.

At the meeting, Rep. Kweon Seong-dong, the floor leader of the ruling People Power Party (PPP), called for deregulation to overcome the economic crisis and pledged his party's legislation support.

"The president must manage the results of regulatory innovations throughout his term," he said. "We will coordinate with the main opposition party through negotiations when dealing with legislations on excessive regulations that hinder our people's economy." 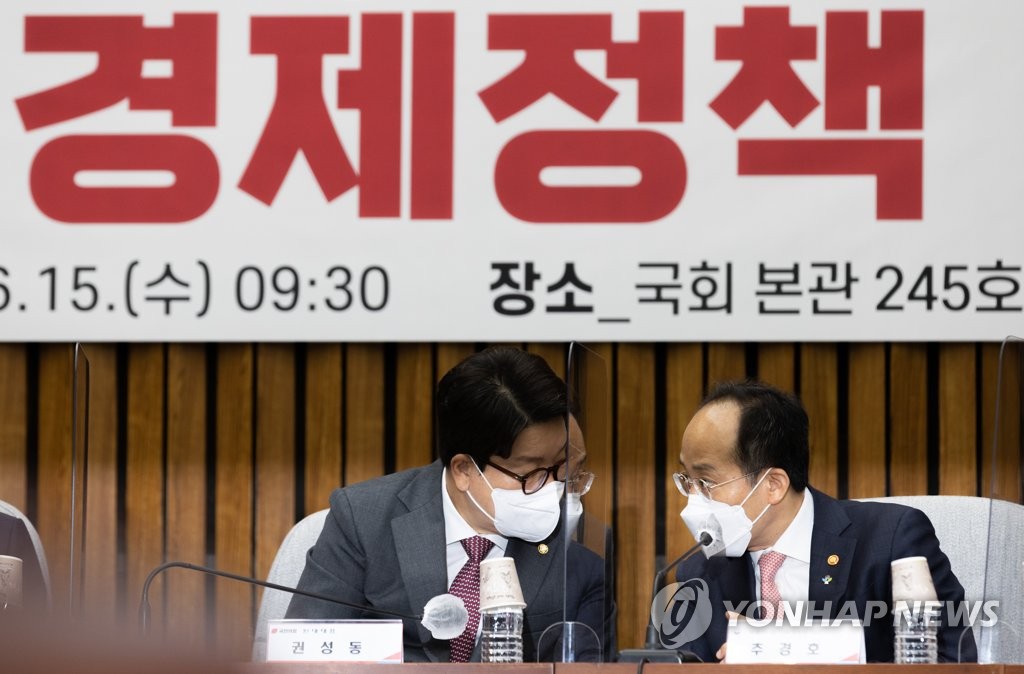 The PPP and the government agreed that the country is facing a "grave economic crisis" and that a drastic regulatory reform is needed to vitalize the economy.

The PPP said it asked the government to reinforce tax support, including lowering corporate tax rates, while expanding fuel tax cuts and increasing the basic pension for elderly people to stabilize people's lives.