SEOUL, June 15 (Yonhap) -- Finance Minister Choo Kyung-ho plans to meet with the chiefs of the central bank and the financial regulators this week to discuss the impact of the Federal Reserve's looming rate hike, his office said Wednesday.

Choo will hold a meeting on Thursday with Bank of Korea (BOK) Gov. Rhee Chang-yong, Lee Bok-hyun, chief of the Financial Supervisory Service, and Kim So-young, vice chairman of the Financial Services Commission (FSC), according to the finance ministry.

It would mark the first time that Choo would hold an extended meeting on macroeconomic situations with the new chiefs of the BOK and financial regulators, after the new government took office last month. Kim Joo-hyun, the nominee for the FSC chief, is currently preparing for a confirmation hearing.

The participants are expected to discuss the results of the Fed's policy meeting and its impact on the financial market.

South Korea's financial markets have been roiled this week by the growing prospect that the Fed could raise interest rates by 75 basis points, during its two-day policy meeting that began Tuesday (U.S. time), to tame surging inflation.

Seoul's stocks traded lower Wednesday, poising to extend their weakness to the seventh straight day. The Korean currency sharply fell against the U.S. dollar this week, with the won dipping by 15.10 won per the dollar Monday alone.

The finance ministry and the BOK vowed to take measures to stabilize the financial market, as market volatility is expected to intensify due to the Fed's meeting. 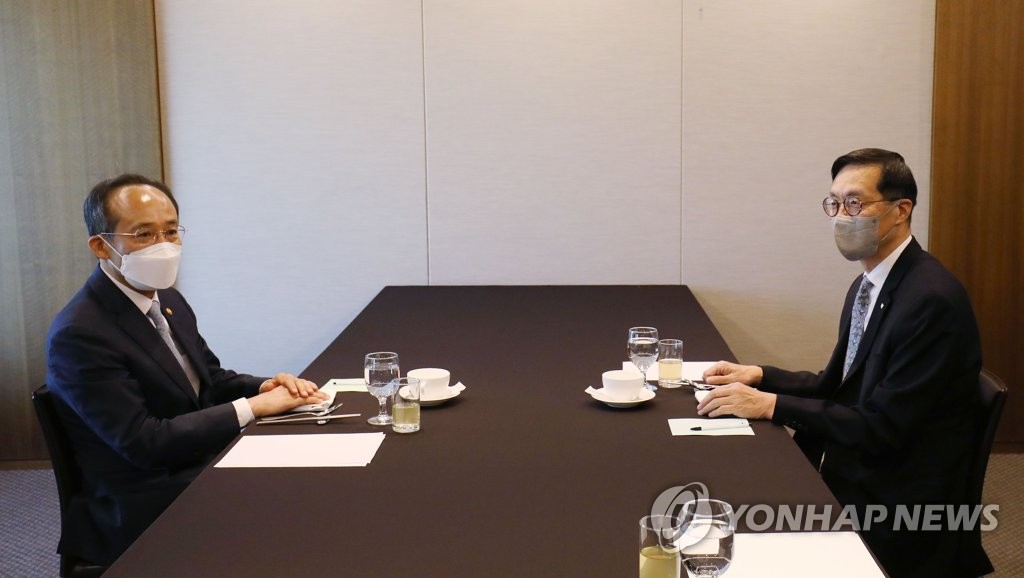