Yoon made the remark during a meeting on the new government's economic policy directions where officials mapped out economic plans over the next five years.

"Our economy is facing grave internal and external conditions," Yoon said. "We must solve the chronic issues of low growth and polarization by growing our economy swiftly, while overcoming the current crisis in people's livelihoods." 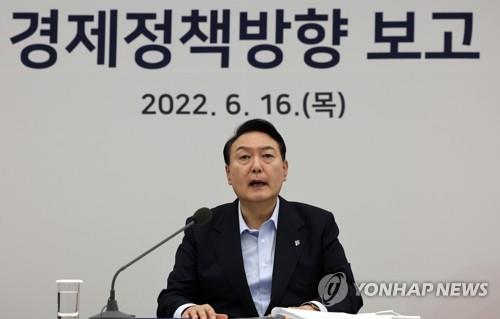 To overcome the crisis, Yoon said the country should put the private sector and the market in the driver's seat.

"I have emphasized many times that I will respect the freedom and creativity of the private sector," he said. "We will boldly improve systems and regulations that undermine the competitiveness of businesses and dampen entrepreneurship, while taking actions against unfair practices that disrupt the marker order in accordance with laws and principles."

Yoon added the government will "do everything it can" to support research and development (R&D) activities in the country's key industries, such as semiconductors, and fostering talent, stressing it can no longer ignore the contraction in private investments and productivity.

He also vowed not to ignore "structural problems of the society" and called for reforms in the labor market, as well as education and pension systems.

"For a government that thinks about the future, it is the right way to go, and I believe the political community will cooperate bipartisanly," he said. "Price, interest rates and housing issues that the people are currently facing should be urgently solved."

The presidential office said the attendees of the meeting included 21 experts from various sectors, including those from startups, business lobbying groups, academia and private research institutions.