The Korea Aerospace Research Institute (KARI) on Wednesday decided to indefinitely postpone the launch of Nuri scheduled for Thursday after the sensor was seen malfunctioning during a final pre-launch check-up at the launch pad in Naro Space Center in Goheung, a southern coastal village some 470 kilometers south of Seoul.

KARI engineers held a technical inspection meeting for Nuri, which has been transported back to the assembly building, earlier in the day to try to identify the cause of the sensor malfunction.

In the afternoon, engineers began inspecting the internals of the first stage of Nuri, where the sensor in question was installed.

According to officials, readings on oxidizer tank sensors normally change during the rocket erection process. Readings on the sensor for Nuri, however, remained static during the process. 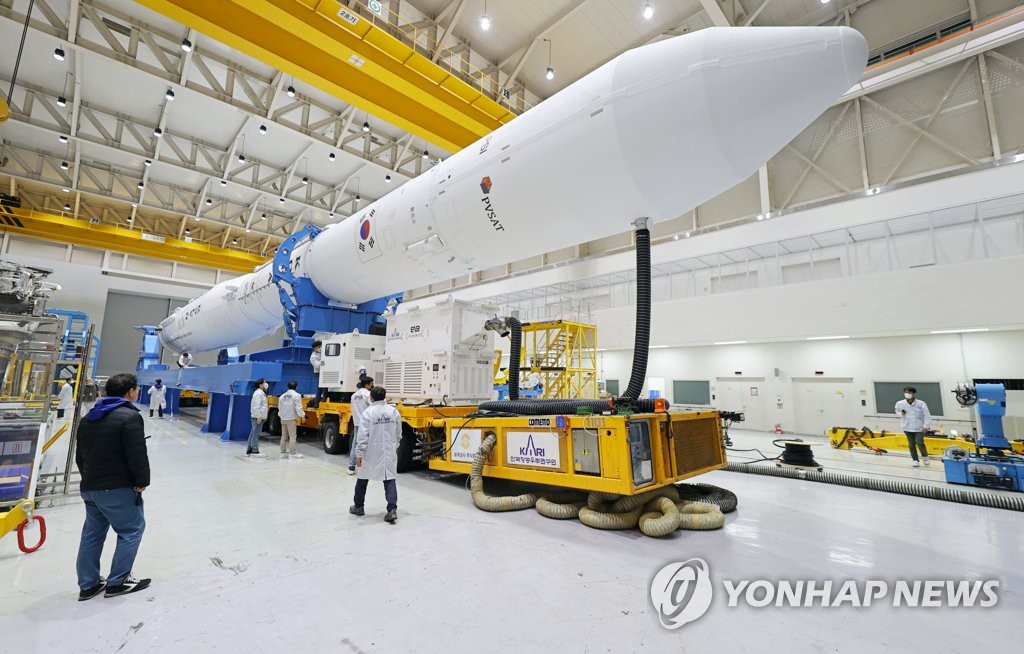 Officials said Wednesday they were not certain of the cause of the problem, saying that the sensor itself could be flawed, or it could be a cable or terminal box issue.

"If we are able to identify a problematic part, we would either replace or fix it. If we find no problem, we should then check the level sensor in the oxidizer tank and replace it if necessary," Koh Jung-hwan, head of KARI's space rocket development operation, said in a press briefing Thursday.

Koh said the engineers were proceeding with the inspection with caution, as the rocket has been prepped for launch, with its ignition system in place.

The ministry has set the period between Thursday and June 23 as the launch window. If the cause of the problem isn't identified and corrected within the period, the launch could be delayed to late autumn, after the end of the seasonal monsoon and typhoon period.

South Korea had initially planned to launch the rocket Wednesday in a mission to put multiple satellites into orbit, but it was delayed by a day due to strong winds.

In its first launch in October, Nuri successfully flew to a target altitude of 700 kilometers but failed to put a dummy satellite into orbit, as its third-stage engine burned out earlier than expected.