The Minimum Wage Commission, which is composed of 27 representatives, nine each from labor, business and the general public, met at the government complex in Sejong for its fourth plenary session this year to negotiate next year's minimum wage.

A differentiated minimum wage was adopted in 1988, when the minimum wage system was first introduced, but it has never been applied.

At issue during Thursday's session was whether the minimum wage should be set lower for industries that struggle to pay wages, such as food service. The business side, mostly small business owners, has advocated for the system, while the labor side has balked, saying it defeats the purpose of the minimum wage.

The panel voted 16-11 in opposition to differentiating the rate.

Differentiating the rate by industry was one of President Yoon Suk-yeol's campaign pledges.

Both sides -- labor and management -- also have not yet submitted their proposals for next year's minimum wage.

A commission head has asked both of them to submit their initial proposals by the sixth plenary session scheduled for Tuesday. 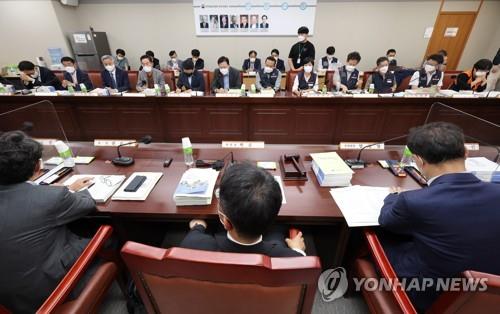 Panel votes not to differentiate minimum wage by industry next year

Panel votes not to differentiate minimum wage by industry next year