SEOUL, June 18 (Yonhap) -- Prime Minister Han Duck-soo has said South Korea will actively use nuclear energy to meet its target of carbon neutrality and as a tool for the nation's energy security.

Han made the remarks in a video address to a global climate meeting hosted by U.S. President Joe Biden on Friday.

South Korea "will actively utilize nuclear power plants as a means of energy security and carbon neutrality," Han told the Major Economies Forum on Energy and Climate, according to a statement provided by Han's office.

Han said South Korea will draw up a plan for the right mix of nuclear power and renewable energy to achieve carbon neutrality.

Last year, South Korea signed a global pact to cut releases of methane by 30 percent by 2030. 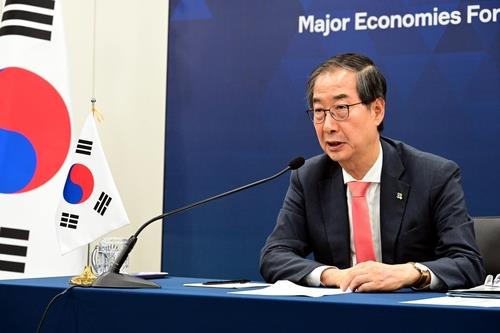