The biannual Korea-U.S. Integrated Defense Dialogue (KIDD) will be held as the allies are striving to reinforce security coordination following a series of North Korean ballistic missile launches and speculation that Pyongyang has completed preparations for a nuclear test.

The exact date for the KIDD session has yet to be finalized, but it is expected to be held before or around mid-July, according to the sources.

High on the agenda is expected to be Seoul's push to strengthen the enforceability of America's extended deterrence and its stated commitment to mobilizing a full range of its military capabilities, including nuclear options, to defend its Asian ally.

The two sides could also discuss the expansion of combined military exercises and the deployment of U.S. strategic military assets to Korea in a "timely and coordinated" manner -- in line with last month's summit agreement between Presidents Yoon Suk-yeol and Joe Biden.

Other likely issues include joint efforts to normalize the operation of a U.S. THAAD missile defense unit here, which has been in the status of "temporary installation" pending an environmental impact assessment.

Launched in 2011, KIDD is a comprehensive defense meeting between the allies covering a wide range of issues, including Washington's extended deterrence. 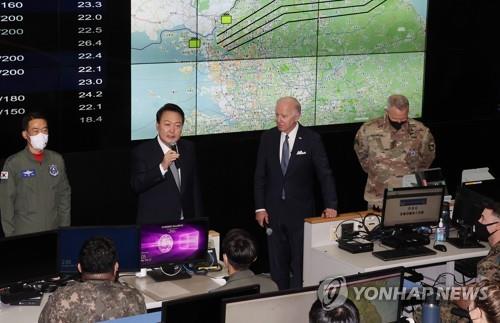 S. Korea, U.S. to hold talks next month on deterrence against N. Korea

S. Korea, U.S. to hold talks next month on deterrence against N. Korea