The rival parties have made little progress in negotiations to determine which party should head which parliamentary committees, leaving the National Assembly idling for more than three weeks after the first half of the 21st National Assembly ended last month.

Negotiations have stalled over issues, such as which party should be the head of the judiciary committee.

"The ruling and opposition parties must meet over and over again until they reach a compromise," PPP floor leader Kweon Seong-dong said. "We will negotiate with a determination of concluding the negotiations this week."

The idling sparked criticism the National Assembly is not doing what it is supposed to do to help the country overcome economic difficulties. It also pushed back confirmation hearings for the education and health minister nominees indefinitely. 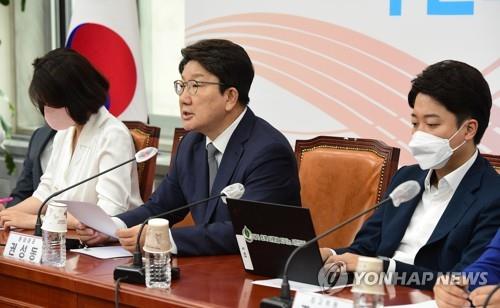 The PPP and the DP have been especially at loggerheads over the chairmanship of the parliamentary legislation and judiciary committee, a key Assembly panel that has the power to approve bills before they are put to a plenary vote.

Since its landslide victory in the 2020 parliamentary elections, the DP took both the speaker and the legislation committee chair posts, breaking the long tradition of dividing the posts with the main opposition party.

But since the move drew criticism of the DP dominating the legislative process, it agreed with the PPP last year to hand over the legislative committee chair post in the second half of the National Assembly term.

Based on the deal, the PPP has been claiming that it should take the chairmanship. But the DP, which currently controls the National Assembly with 170 out of 299 seats, has been reluctant to hand over the post and called for the renegotiation of the deal, saying since it now has become the main opposition, the chairmanship must stay with the party.

Against the DP's response, the PPP has been saying it will not cooperate on the election of the National Assembly speaker. 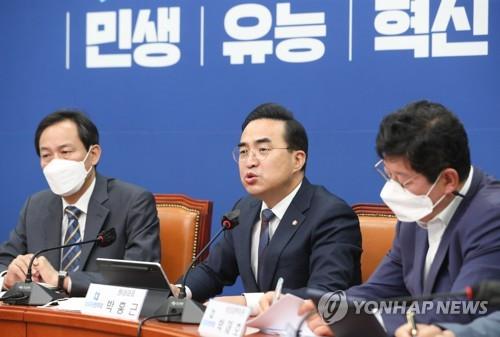 In South Korea, it has been customary for the largest party in terms of parliamentary seats to take the speaker position, with the No. 2 party getting the legislative committee chairmanship.

"The DP, which is still the ruling party in the National Assembly, is still trying to take both the speaker and the legislative committee chair posts," Kweon said. "If the DP breaks the agreement, and tries to unilaterally elect the speaker, it will not be able to stop the public breaking away from the party."

On the latest proposal, the DP urged the PPP to offer new concessions first and cooperate on the election of the speaker.

"Our party has requested many times for the speaker to be elected so that we can break the vacuum in the legislation and handle urgent bills," DP floor leader Park Hong-geun said. "But the PPP refused to do so ... and is not taking any action to restore trust between the parties."