SEOUL, June 20 (Yonhap) -- Seoul shares dipped more than 2 percent Monday to a one-year low, as investors were gripped by fears that a recession in the global economy may come amid faster-than-expected monetary tightening in major economies. The Korean won fell sharply against the U.S. dollar.

Trading volume was moderate at about 583 million shares worth some 9 trillion won (US$7 billion), with losers outnumbering gainers 585 to 62. 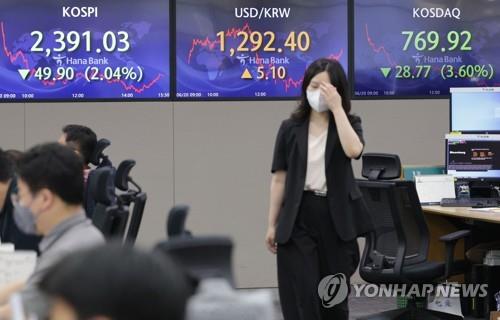 After a weak start, the KOSPI increasingly lost ground, led by chipmakers and other market heavyweights.

Last week, the U.S. Fed raised its policy rate by 0.75 percentage point, the sharpest increase since 1994.

The local currency closed at 1,292.4 won against the U.S. dollar, down 5.1 won from the previous session's close.

Bond prices, which move inversely to yields, closed higher. The yield on three-year Treasurys lost 7 basis points to 3.675 percent, and the return on the benchmark five-year government bond fell 2.1 basis points to 3.834 percent.