SEOUL, June 21 (Yonhap) -- South Korea's central bank said Tuesday it expected inflation to grow at a faster pace than previously anticipated and possibly hit the highest level in 14 years for this year as price pressures are mounting from rising demand and a tight supply.

The Bank of Korea (BOK) provided the updated projections on inflation in a report on the latest price situations about a month after it sharply revised up its inflation forecast for this year from 3.1 percent to 4.5 percent.

"The future price trend is expected to surpass our forecast made in May given changes in various circumstances, including accelerating international oil prices," the report said. "There is a possibility that this year's price growth exceeds the level (of 4.7 percent) in 2008.

"Going forward, consumer prices will likely continue their upward move by staying over a 5 percent rise for the time being as inflation pressures are mounting from both the supply and demand sides," it added.

The BOK also forecast inflation in the third quarter of this year could exceed 5 percent for the first time since 2008.

Those renewed projections came as South Korea is facing rising inflation pressures from rebounding consumption from the pandemic, high-flying crude oil and commodity prices amid supply chain disruptions worsened by the ongoing war in Ukraine.

The country's consumer prices jumped 5.4 percent on-year in May, the fastest rise in almost 14 years. The BOK analyzed that external factors, such as rising energy and food prices, accounted for more than half of the May tally.

In an effort to keep a lid on inflation, the BOK hiked its policy rate by a quarter percentage point to 1.75 percent in May, the fifth increase since August last year.

More rate hikes are expected to come in months with no short-term let-up in upward inflation pressures.

Also raising the expectations for further monetary tightening is interest rates in the United States could sooner or later become higher than those in South Korea, which could precipitate capital outflows from the country in pursuit of higher returns.

Asked whether the BOK will consider a "big step" of raising its rate by 0.5 percentage point at a time following the U.S. Fed's 0.75 percentage rate increase last week, BOK Gov. Rhee Chang-yong earlier said the central bank will make decisions by analyzing market and economic situations until the last moment.

His remark was interpreted as leaving all monetary policy options on the table in the face of growing risks from inflation. The BOK has not raised its interest rate by 0.5 percentage point or higher at a time, as it usually resorts to quarter percentage-point increments when adjusting monetary policy.

The BOK will hold its next rate-setting meeting July 13. 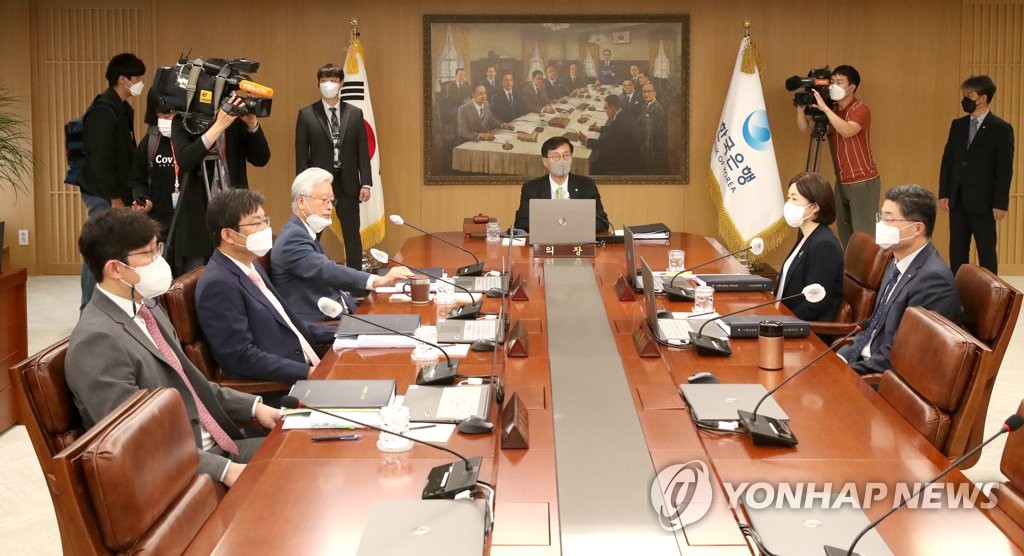