SEOUL, June 21 (Yonhap) -- The government on Tuesday vowed to relax regulations on loans and tax deductions for tenants and to extend tax benefits to landlords who raise rental fees at a minimum level in a move to help ease financial burdens on tenants and stabilize the housing market.

Under the Yoon Suk-yeol administration's first package of measures on the property market, the government also pledged to reform the presale price cap scheme imposed on private apartments and ease restrictions on home transactions in Seoul and other high-demand areas as part of efforts to boost housing supplies.

The Yoon government has vowed an overhaul of the real estate policy, saying the previous government's pursuit of tougher regulations and heavier taxes to curb speculation rather caused a surge in housing prices.

In detail, the government decided to give landlords a waiver of the two-year residency requirement needed for tax incentives in case they voluntarily raise rentals by less than 5 percent compared with their previous contracts, according to the finance ministry.

Up to 180 million won (US$139,211) of loans will be available for those who need to make a new "jeonse" contract within a year after the expiration of their four-year contracts. Currently, the maximum amount came to 120 million won.

The government will also raise the tax deduction rate for monthly rentals to the maximum 15 percent from the current 12 percent.

The limit of income tax deduction for repayment of home rental loans will also be extended from 3 million won to 4 million won. 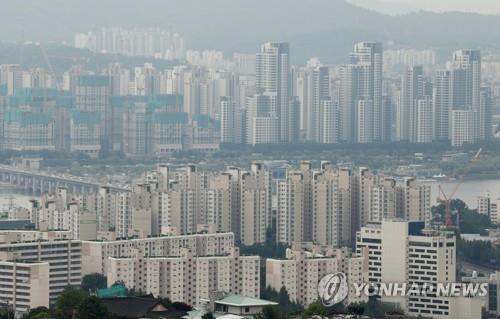 Concerns have risen over a crisis in the housing lease market in the second half of this year on surging housing prices. The average deposit for a long-term apartment rental in Seoul, for example, jumped more than 30 percent over the past two years.

In 2020, three key acts meant to protect tenants came into force, allowing tenants to extend their two-year jeonse contacts for another two years and placing a 5 percent price hike cap on deposits. But the Yoon government and some experts have said they have rather led to a shortage of jeonse homes and their price surge.

"We will get down to in-depth discussions with related ministries to revise the acts, which is necessary to stabilize the housing rental market in a fundamental manner," Land Minister Won Hee-ryong said.

The government also came up with comprehensive plans to boost housing supplies.

It pledged to offer a tax cut to landlords who sell their homes after leases of more than a decade.

The scheme to cap presale prices of privately built apartments will be revised in a way to help developers and homeowners better reflect rising costs and other market prices, which is expected to speed up building procedures and to increase supplies.

By the end of this month, the government will wrap up the review of regions designated as "overheated speculative areas" for the potential relaxation of tougher rules on lending and transactions there, according to the finance ministry.

Currently, all of the 25 wards in Seoul and four districts in Gyeonggi Province are subject to such regulations.

The government also vowed to put forth a detailed road map by mid-August, or within 100 days of the launch of the new administration, to supply more than 2.5 million units of new homes across the country.

The government will devise a comprehensive plan to better support home buying of young people and middle-class households amid surging housing prices and high interest rates, the ministry said. 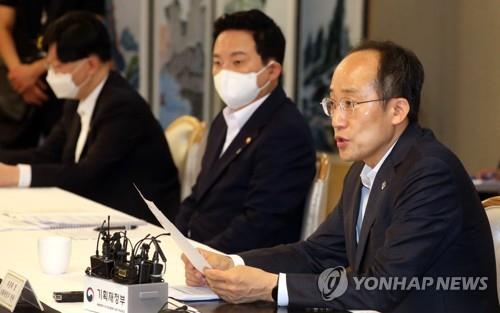