(ATTN; UPDATES with more info throughout)
By Kim Han-joo

SEOUL, June 21 (Yonhap) -- The interior ministry on Tuesday unveiled a plan to set up a new bureau to exercise direct control of police despite protest and concern the move could put the law enforcement agency under political influence.

The establishment of a new organization overseeing police was one of the recommendations that an advisory committee, which was set up at the instruction of Minister Lee Sang-min, made as part of a set of police reform proposals.

It will mark the first time in 31 years for the interior ministry to exercise direct control of police since the law enforcement agency was spun off as an outside organization of the ministry in 1991 as part of efforts to ensure its independence and neutrality.

The committee consists of nine members, including six civilians, such as professors and lawyers. It is co-chaired by Vice Minister of the Interior and Safety Han Chang-seob and lawyer Hwang Jeong-geun, who formerly served as a district court judge.

"Such expanded and strengthened police power is unprecedented," lawyer Hwang told reporters during a press conference, adding supervising the police organization is duly needed at a time when police are scheduled to take over greater roles from the prosecution.

Vice Minster Han said such advisories can be carried out in accordance with a wide range of laws, including the Constitution and the law governing police that guarantees various police responsibilities to the interior minister.

The proposals are advisory, but they are mostly likely to be adopted.

The proposals will first be briefed to Minister Lee and will be soon implemented after going through due procedures, according to Vice Minister Han.

The plan, meanwhile, drew criticism from within the police and the main opposition Democratic Party (DP).

Later Tuesday, a group of Seoul police officers denounced the plan, saying it sets back the clock.

"An idea of intervening in personnel management, budget and inspection of police through establishing police bureau within the interior ministry will eventually damage independence and neutrality," the group said in a press release.

The committee, however, refuted such claims, saying that a check and balance of powers is needed for the law enforcement agency.

The opposition DP has accused the government of attempting to infringe on the political neutrality of police, arguing the bureau could be used to control police for political purposes. 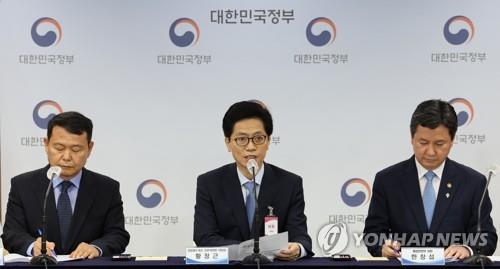