SEOUL, June 21 (Yonhap) -- The ruling People Power Party (PPP) on Tuesday launched a task force to reveal the truth behind the 2020 death of a fisheries official, pressing the main opposition party to cooperate for the disclosure of classified presidential records related to the case.

The launch came days after the Coast Guard apologized for having previously presumed a South Korean fisheries official killed by North Korea's military near the western sea border in 2020 was attempting to voluntarily defect to the North.

Reversing its previous assumption of the official's intention to defect to North Korea, the Coast Guard said it has not found any circumstances suggesting he was attempting to defect. 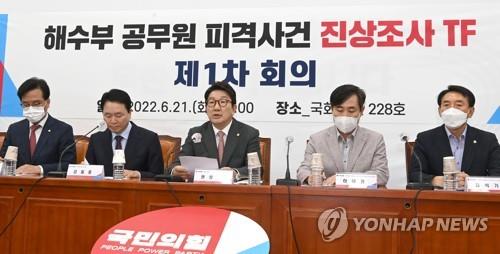 In the first task force meeting, the PPP said it will look into why former President Moon Jae-in's government could not save the deceased official when the government learned of the situation six hours before his death and on what grounds the defection assumption was made.

"The fisheries official was killed two times. The first time was by North Korea's gunshots, and the second time was the killing of his human dignity by the Moon Jae-in government," PPP floor leader Kweon Seong-dong said.

Kweon claimed the Moon government had already reached a conclusion that the official tried to defect, even before the probe results came out.

Rep. Ha Tae-keung, who leads the task force, also accused the previous government of lying that it was impossible to contact Pyongyang at the time because of a closed communication line when the line remained open.

The PPP also called for the disclosure of records of presidential office meetings related to the case.

Classified presidential records cannot be released to the public for 15 years unless two-thirds of lawmakers vote for the disclosure. The DP currently controls the National Assembly with 170 out of 299 seats.

The DP hit back, saying the party will cooperate with the disclosure of whatever records there are if the PPP makes an official request, but the ruling bloc should take responsibility for possible security risks from the disclosure.