SEOUL, June 21 (Yonhap) -- South Korean Hwang Sun-woo narrowly missed out on the semifinals in the men's 100m freestyle at the world championships in Hungary on Tuesday, falling short in a quest for his second medal at the biennal event.

With only the top 16 swimmers from the heats advancing to the semifinals, Hwang finished tied for 17th with Zac Incerti of Australia at 48.61 seconds at Duna Arena in Budapest.

Alessandro Miressi of Italy secured the last ticket to the semifinals in 48.51 seconds.

Hwang won the silver medal in the 200m freestyle on Monday, joining Park Tae-hwan, the 2007 and 2011 champion in the 400m free and 2007 bronze medalist in the 200m free, as the only South Korean swimmers with a world championship medal. 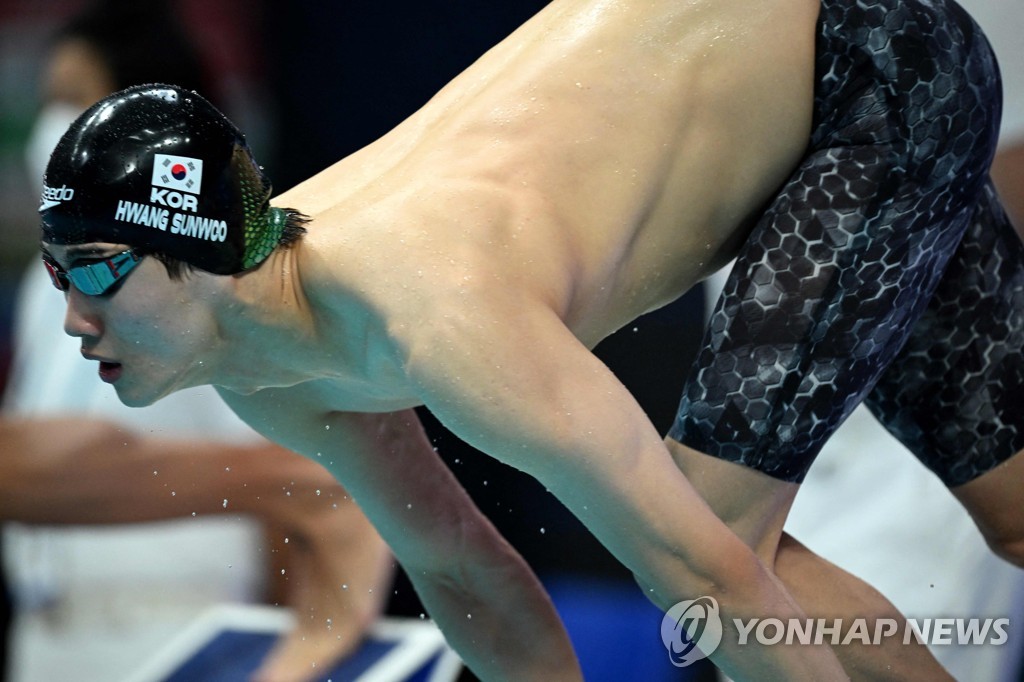 Hwang and Park are also two of just four Asians to have won a medal in the 200m freestyle in the event's history, which dates back to 1973.

In the 100m freestyle, the 2015 champion from China, Ning Zetao, remains the only Asian to have reached the podium at the worlds.

Competing in Heat 9, Hwang had the fourth-fastest reaction time among 10 swimmers with 0.61 second. The South Korean touched the 50m pad in 23.53 seconds, good for sixth place. Hwang tried to make up ground over the home stretch, but his final split of 25.08 seconds only pushed him to fourth overall in his group.

Hwang watched his time tumble down the overall standings as 12 swimmers from the two remaining groups all posted better times.

Hwang arrived in Hungary holding the 32nd-fastest time in the 100m free this year at 48.42 seconds. His personal best of 47.56 seconds, set during the Tokyo Olympics last summer, is also the Asian record.

David Popovici of Romania, who beat Hwang for the 200m free gold, won the 100m heats in 47.60 seconds. Caeleb Dressel, the two-time defending champions from the United States, ranked second with 47.95 seconds.