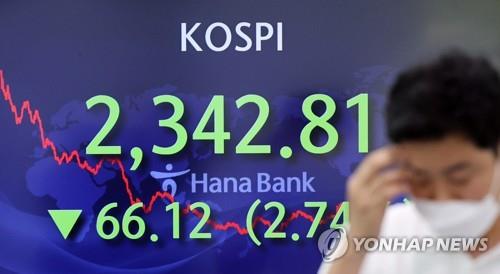 The market got off to a good start, buoyed by Wall Street's gains. But it fell into negative territory, as aggressive rate hikes and fears about economic downturn weighed down investor sentiment.

Overnight, Wall Street made a comeback following a brutal week in the wake of the U.S. Federal Reserve's rate hike of 0.75 percent, its steepest increase since 1994, to tame inflation.

Seoul shares slumped across the board with tech shares leading the losses.

The local currency ended at 1,297.30 won against the U.S. dollar, down 3.7 won from the previous session's close and the lowest value since July 2009.

Bond prices, which move inversely to yields, closed higher. The yield on three-year Treasurys fell 14.1 basis points to 3.522 percent, and the return on the benchmark five-year government also went down 12.7 basis points to 3.707 percent.