INCHEON, June 22 (Yonhap) -- The chief of the Korea Coast Guard apologized Wednesday for "causing misunderstanding," days after the organization overturned its previous announcement that a fisheries official killed by North Korea in 2020 was attempting to defect to the North.

Last week, the Coast Guard and the defense ministry announced they have not found any circumstances backing the probe results from two years ago, reversing from their previous stance and apologizing to the bereaved family.

The 47-year-old official was fatally shot by the North's military on Sept. 22, 2020, near the inter-Korean sea border in the Yellow Sea, after going missing the previous day while on duty on board a fishery inspection boat. The Coast Guard and the defense ministry announced at the time he could have been attempting to defect to the North.

"I sincerely apologize for causing a lot of misunderstanding in regard to the probe results," Korea Coast Guard Commissioner General Jeong Bong-hun told reporters at the coast guard headquarters in Incheon, west of Seoul.

"I feel deeply responsible as commissioner general for causing confusion and disappointment," he said.

On Wednesday, the family of the late fisheries official lodged criminal complaints against three of former President Moon Jae-in's secretaries, including former National Security Advisor Suh Hoon, to hold them accountable for their beloved's death. The family accused the then Moon administration of doing "nothing" to save him.

"I offer my condolence and consolation to the bereaved family," he said, reiterating the Coast Guard ultimately concluded that it was impossible to have enough evidence showing he was trying to defect to the North. 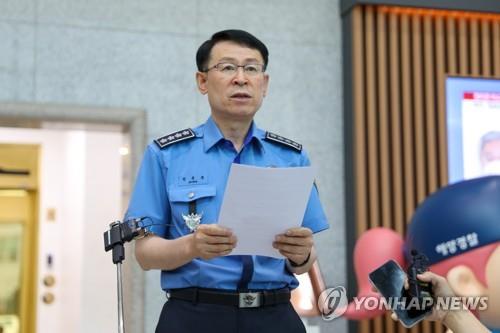