Lee Chang-yang, minister of trade, industry and energy, made the request during a virtual meeting with his Saudi Arabian counterpart, Prince Abdulaziz bin Salman, as Riyadh is proactively pushing for a mega project to produce green hydrogen, the ministry said.

During Thursday's meeting, Lee expressed gratitude for Saudi Arabia's stable supply of oil to his country, and voiced hope for its role for stabilizing the global oil market as a key exporter, the ministry said.

Saudi Arabia is South Korea's No. 1 oil supplier, with its shipments coming to 290 million barrels in 2021, or 29.3 percent of the country's total imports. It is also Seoul's fifth largest supplier of liquefied petroleum gas. South Korea depends on imports for most of its energy needs.

"The two sides shared the need to further strengthen cooperation in energy, industry, investment and various other fields as they mark the 60th anniversary of establishing diplomatic relations this year," the ministry said. 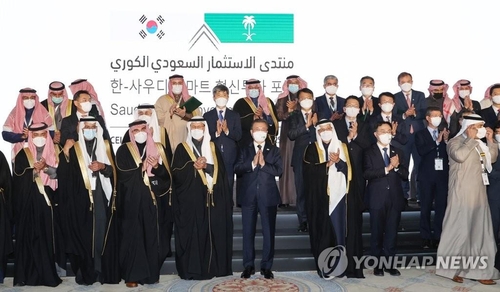