SEOUL, June 24 (Yonhap) -- South Korea will sternly respond to North Korean provocations with actions, rather than with words, based on its solid alliance with the United States, while simultaneously urging the North to come to the dialogue table, Prime Minister Han Duck-soo said Friday.

In his speech at the 2022 Korean Peninsula Peace Symposium, co-hosted by Yonhap News Agency and the Ministry of Unification, Han said Seoul intends to normalize inter-Korean relations through a bold plan for substantial denuclearization and prosperity on the Korean Peninsula, while upholding the principles of its relations with Pyeongyang.

"North Korea has taken a string of provocative actions, such as successive firing of ballistic missiles and signs of a seventh nuclear test, escalating tensions on the Korean Peninsula and in Northeast Asia and threatening international peace and stability," the prime minister said.

"The recent situation on the Korean Peninsula is grave." 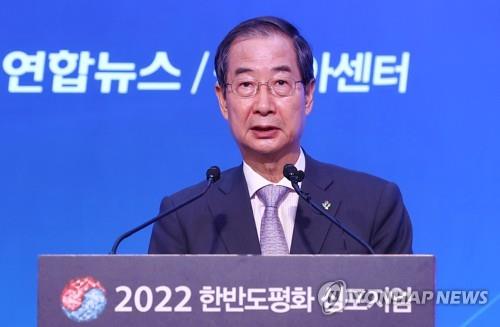 Regardless of the political and military issues, the Seoul government will actively pursue humanitarian cooperation with Pyeongyang to enhance the quality of life of North Koreans and help the North cope with COVID-19, Han said.

He also emphasized the importance of South Korea establishing strategic relations with the U.S., China, Russia and Japan from the geopolitical perspective.

"Judging from the Korean Peninsula's geopolitical position, our role in bringing about cooperation and balance with neighboring countries is of paramount importance," Han said.

"First of all, we will further develop our relationship with Washington, which has been strengthened through the recent South Korea-U.S. summit, into a global comprehensive strategic alliance. As a launching member of the Indo-Pacific Economic Framework (IPEF), South Korea will also take a leading role in building an open, transparent and inclusive economic order in the region," he said.