She dropped her first album as a soloist at 1 p.m., becoming the first TWICE member to go solo.

"I think it was not late for me to debut as a solo artist and was rather the best timing to do so, because there is so much TWICE has achieved as a group over the years," the vocalist said during a press conference held at a Seoul hotel a few hours before the release of the EP, titled "Im Nayeon," at 1 p.m.

"It would be good if we can show our newer and fresher sides through solo projects at this point in time."

One of the most popular girl groups in Asia, TWICE has been a prolific group since its debut in October 2015. Most recently, it concluded a sold-out North American tour, only to return for two encore concerts in Los Angles. 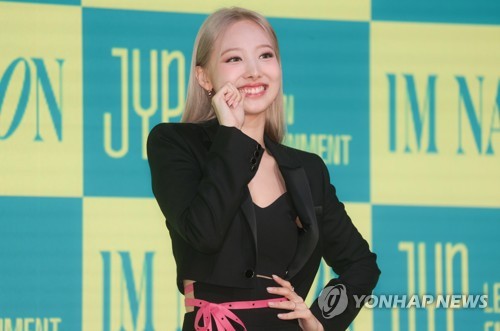 The band's oldest member, however, confided she felt "fear" of becoming the first TWICE member to do a solo project.

"I was not sure if I could stand alone without eight other bandmates," the 26-year-old recalled. "Before, I did not have many chances to sing alone from beginning to end, since we have many members... So, it was very difficult."

She said she learned how to sing all from the beginning and realized once again how much she likes music in the process of making the album.

"I thought it was physically challenging to perform all alone, but I adapted to this, too... I feel like I have pushed my boundaries through this work."

The EP's title has a double meaning, which is the singer's full Korean name, Im Na-yeon, and her confident declaration that "I'm Nayeon," according to the agency.

She debuted in 2015 as a TWICE member and has since been a strong presence in the group, showing off her fresh and lively charm.

She said she cared very much about showing her new sides, on top of her image that has been building for nearly seven years as a TWICE member, with the new album. For this, she said she tried many new styles in hair, makeup and costume, among others. 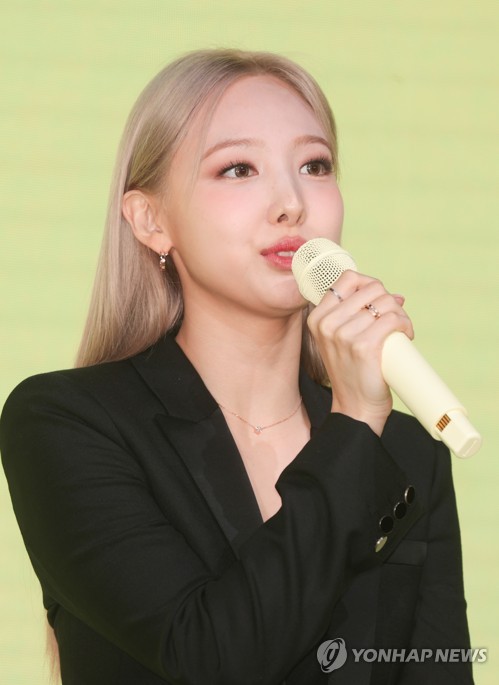 The album has seven tracks, including lead single "Pop!," "No problem," "Love Countdown," "Candyfloss," "All or Nothing" and "Happy Birthday to You."

"Pop!" is an uplifting summery song that recalls TWICE's signature music style, including the fun bubblegum beat and addictive melody.

Its lyrics, both Korean and English, are about teasing a love interest who has not been good at hiding his feelings.

When asked to single out her own strength as a female soloist, Nayeon said people say listening to TWICE's music always makes them feel better. "I hope to do like that this time as well," she added.

Asked what makes her feel the most like herself, she answered: "I think that may be my straightforward personality. I hope such a side will be naturally shown when I perform the song on stage."