Pyongyang's central district received 58 millimeters of rain per hour, while the district of the Taedong River, which runs through the capital city, had 67 mm of rain per hour Saturday night, the North's weather agency was quoted as saying by the Korean Central Television.

The western port city of Nampo was hit by strong winds of more than 20 meters per second.

Video footage showed uprooted and broken trees in downtown Pyongyang and the water level of the Taedong River rising near the warning level.

The State Hydro-Meteorological Administration said this year's rainy season is expected to begin Monday, forecasting up to 300 mm of rain in western parts of the nation from Tuesday to Thursday.

Authorities called for thorough preparations to prevent flood damage to farmlands and households, reminding residents of Typhoon Bolaven that battered the nation in 2012. 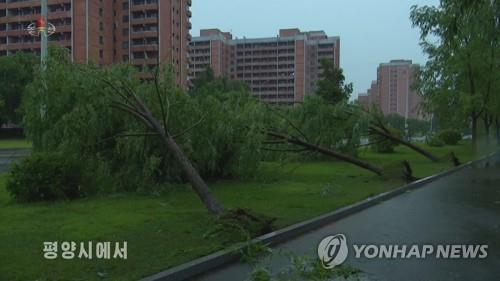