Kim expressed his intention to quit earlier in the day, days after Yoon reprimanded police over a recent personnel reshuffle flip-flopping. The resignation offer also came as police have protested the interior ministry's plan to establish a "police bureau" to increase its control of the law enforcement agency.

"Should Commissioner General Kim officially submit his resignation, it will be dealt with according to procedures prescribed by law," the presidential official said.

The remark suggests Yoon is unlikely to accept the resignation immediately. Moreover, the president left on a five-day trip to Spain to attend a NATO summit and to hold a three-way meeting with U.S. President Joe Biden and Japanese Prime Minister Fumio Kishida.

Kim's resignation was also seen as an expression of protest against the ministry's "police bureau" plan.

"I determined that resigning now would be the best way," Kim said, offering an apology to the public and policemen for "failing" to safeguard the neutrality and independence of police.

"Throughout history, our society learned that enforcing the police's neutrality and democratization are the key to advancing its services to the public," he said, adding that the establishment of the envisioned police bureau will fundamentally compromise the foundation of the police system.

Kim was appointed under the previous Moon Jae-in administration and his two-year term was to end in late July. 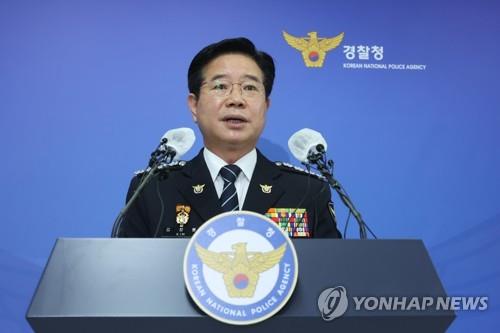