SEOUL, June 27 (Yonhap) -- The previous government of President Moon Jae-in expressed its intention to repatriate two North Korean fishermen in 2019 even before the North made such a request, a ruling party lawmaker said Monday.

On Nov. 2, 2019, the two fishermen were captured near the eastern sea border, and the Moon government notified the North three days later that it wanted to deport the two and return their boat, Rep. Tae Yong-ho of the ruling People Power Party said, citing information from the presidential national security office.

The two North Koreans in their 20s, who were accused of killing 16 fellow crew members, then expressed an intent to defect to the South but the government rejected their request on the belief that they had crossed into the South only in order to flee arrest.

The North replied to the South's message on Nov. 6, saying that it would take over the two fishermen and the boat. The two were sent back to North Korea through the inter-Korean truce village of Panmunjom a day later, while the boat was handed over to the North on Nov. 8.

The revelation from Thae is likely to reinforce the conservative side's attack on the previous government that it had a "submissive" attitude toward the North.

The PPP has been looking into the death of a fisheries official killed at sea by North Korea in 2020.

The then government of Moon tentatively concluded that the official was killed while attempting to defect to the North, but the bereaved family has strongly questioned the announcement, arguing he had no reason to do so.

Earlier this month, the Coast Guard and the defense ministry announced that they have not found any circumstances backing the probe results from two years ago, reversing their previous stance and apologizing to the bereaved family. 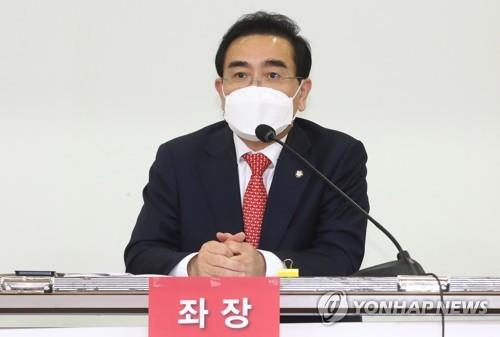