SEOUL, June 27 (Yonhap) -- After playing what may have been his last match in South Korea over the weekend, Incheon United forward Stefan Mugosa thanked his fans and teammates for their support over his four-plus years in the western city.

Mugosa, a 30-year-old Montenegrin striker, is closing in on a deal with Vissel Kobe in the J1 League, Japan's top competition. Reports of Mugosa's move first surfaced last week, and Incheon head coach Jo Sung-hwan acknowledged before Saturday's 1-1 draw with FC Seoul that talks on the player's transfer were indeed ongoing.

Mugosa joined Incheon in January 2018, following stints in Montenegro and Germany. He quickly became one of the K League 1's most dangerous scorers. 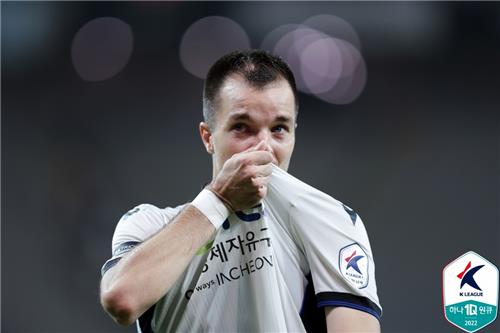 Mugosa is leading the league this season with 14 goals in 18 matches. He has accounted for a little over 60 percent of Incheon's goals this year and has outscored two clubs, Suwon Samsung Bluewings and Seongnam FC, both of which have just 13 goals apiece. Thanks to Mugosa's heroics, Incheon have overachieved to stay in the top-four picture for most of the season.

Losing him will undoubtedly be a massive blow to Incheon, and for Mugosa, the feeling is mutual.

"I want to say I love you so much. Thanks for everything," Mugosa said in a postmatch interview at Seoul World Cup Stadium, when asked for his words to Incheon supporters. "You will always be in my heart. For me, Incheon fans will be No. 1 until the end of my life." 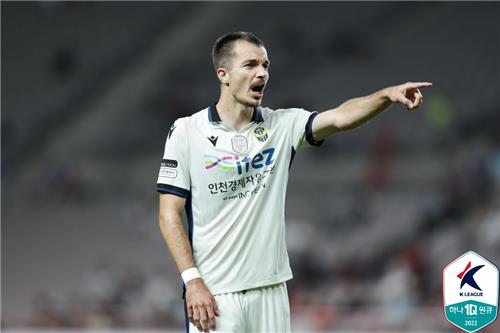 Though Mugosa didn't score in this match, his teammate Lee Myung-joo did to secure the hard-fought point in Seoul. Lee then paid his ultimate respect to Mugosa by celebrating the goal with Mugosa's signature move: Lee raised both arms and flexed them in a goal celebration known as "We Are Strong."

"I am so happy that Myung-joo scored, and we took the point from this game," Mugosa said. "I want to say to him, 'Thank you so much for what you're doing for the team.' I will support (Incheon teammates) always. I love this club too much."

Mugosa has scored 68 goals in 129 matches for Incheon. He once said he wanted to score 100 goals for Incheon, and he still wants to make it happen.

"Of course, I will keep this promise one day," Mugosa said. "It is my goal. Let's see what will happen in the future." 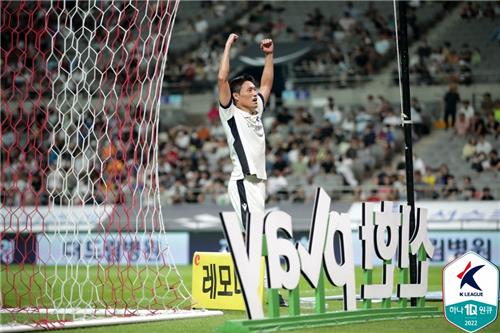