His remarks came amid reports the secretive nation has completed related preparations and is waiting for leader Kim Jong-un's call.

Speaking to members of the Seoul Foreign Correspondents' Club in Seoul, Kwon cited the North's emphasis on taking a hard-line approach of "power for power and head-on contest" it placed during a plenary session of the Workers' Party earlier this month.

"It will not come as a surprise, even if North Korea conducts a nuclear test at any time," he said, raising the need to closely monitor Pyongyang's activities in comprehensive consideration of the situations, including its COVID-19 handling and response to an "acute enteric epidemic" outbreak.

The minister reiterated that "to recap in a sentence, only a political decision remains," as the North has finished all preparations.

"But the North itself may be gauging domestic and external situations (to determine the timing) so as to maximize the effect of a nuclear test," he said.

Kwon stressed the need for China and other countries to advise the North to refrain from conducting a nuclear test and warned the North would face "tremendous" criticism should it carry out the test.

Touching on the recent trend of the North's nuclear arms development, Kwon said the regime appears to be hoping to have offensive capabilities against both the South and the United States.

He was referring to the North's recent push to develop more advanced short-range ballistic missiles and tactical nuclear arms in an apparent shift from its earlier focus on long-range missiles and strategic nuclear arms that are seen as targeting the U.S.

"Having said that, I would like to point out that those who have said the North's nuclear arms do not target the South are wrong," he said.

Kwon also addressed a question about whether the recent decision by the North's ruling Workers' Party's Central Military Commission to add operational duties of frontline units could lead to a breach of the 2018 inter-Korean military tension reduction agreement.

"I believe the decisions at the committee run counter to the spirit of the Sept. 19 military agreement," he said.

In addition, the minister said the North is seeking to exploit the growing rivalry between the U.S. and China, as well as the Russian invasion of Ukraine, in an attempt to alter "the status quo" in regional security via its nuclear development.

"Such a change poses a very serious and fundamental challenge for us in our path toward achieving peace and unification on the Korean Peninsula through North Korea's denuclearization and normalization of inter-Korean relations," he said. 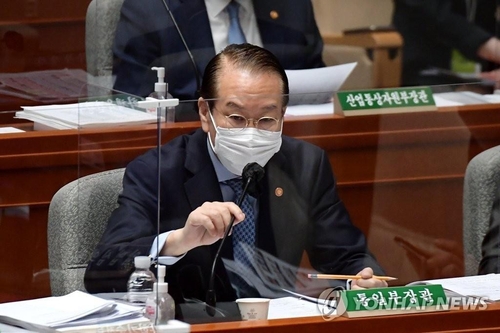