SUWON, South Korea, June 28 (Yonhap) -- The prosecution suspended the imprisonment of former President Lee Myung-bak for three months due to health reasons Tuesday, more than a year and a half after the Supreme Court finalized a 17-year sentence for him for corruption.

The Suwon District Prosecutors Office made the decision to release Lee from the Anyang Correctional Institution, after the 81-year-old former president filed for suspension of his imprisonment earlier this month, citing deteriorating health.

Lee, president from 2008 to 2013, has been serving the sentence since the Supreme Court finalized the 17-year prison term in October 2020 on charges of embezzlement and bribery.

Lee has been in and out of the hospital during his imprisonment for chronic diseases, including diabetes. He was admitted to Seoul National University Hospital in Seoul last week for medical examinations and treatment.

Lee then was reincarcerated in February 2020 following a higher court's ruling but was released again six days later after he successfully challenged the cancellation of the bail.

Following the top court's finalization of the 17-year term, Lee was imprisoned again in November 2020.

Lee was excluded from the presidential pardons by former President Moon Jae-in last year, under which imprisoned ex-President Park Geun-hye was set free. 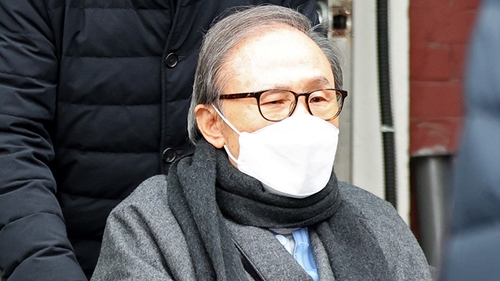