Choo made the request during a meeting with members of the Korea Enterprises Federation, including Sohn Kyung-shik, federation chief and CJ Group chairman, and Rhee In-yong, president of Samsung Electronics Co.

"We're concerned that some IT companies and large conglomerates have recently jacked up wages, and such a trend has shown signs of spreading to other industries and companies," Cho said.

"Excessive wage increases not only worsen the inflation situation but also expand the wage gap between large companies and small to midsized firms, which make workers at SMEs feel a sense of deprivation," he added.

How to tame surging inflation has been South Korea's No. 1 policy priority. The country's consumer prices jumped 5.4 percent on-year in May, the fastest rise in almost 14 years.

"The government has gone all out to stabilize prices. But the government's efforts can never be enough," he said, calling on companies to improve productivity and cut costs in order to help keep inflation in check. 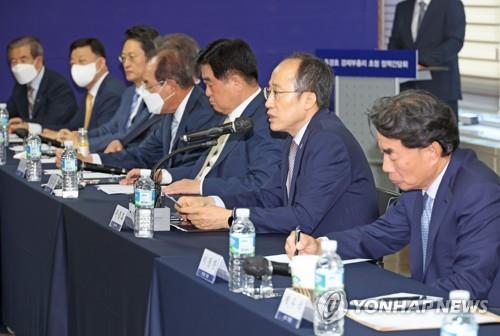