Suh has been blamed for the previous government's announcement that the fisheries official Lee Dae-jun was shot and killed while attempting to defect to the North. That conclusion was overturned earlier this month as the Coast Guard said it had made the announcement without sufficient evidence.

"Suh left the country on June 12, which was before the announcement on this case," said Rep. Kim Byung-joo, who heads the main opposition Democratic Party's task force on the case, during a radio interview. "It is a personal insult to say that he fled the country."

The case has been one of the hottest issues after the Coast Guard and the defense ministry announced on June 16 that they have not found any circumstances backing the probe results from two years ago, reversing their previous stance and apologizing to the bereaved family.

The ruling People Power Party (PPP) has accused the previous government of reaching the conclusion without enough evidence in an effort not to strain relations with the North amid Moon's push for a declaration to formally end the 1950-53 Korean War to jump-start the stalled peace process with Pyongyang.

The DP denied that Suh hurriedly departed for the United States with a tourist visa, saying Suh is currently there on a visitor's visa following an invitation from a U.S. think tank and is looking for a house that he will stay in during his time as a visiting scholar.

On Monday, Suh told Yonhap News Agency that he will cooperate with efforts to establish facts on the case of Lee but insisted there was no wrongdoing by the Moon government in handling the case. 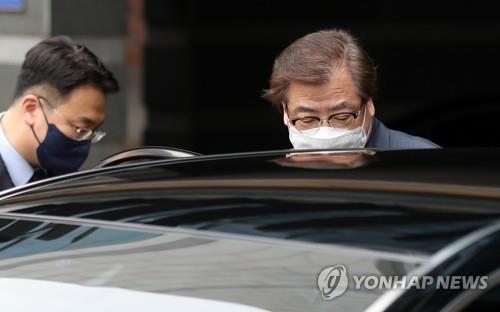