SEOUL, June 28 (Yonhap) -- Kim Han-min, the director and writer of the upcoming historical war film "Hansan," said Tuesday the second installment of his trilogy about battles led by Adm. Yi Sun-sin will catch the hearts of Korean viewers this summer with naval combat scenes that last for about 51 minutes in total.

"Hansan" depicts the historical Battle of Hansan Island on the southern coast of Korea in July 1592. It is one of the biggest victories that the Joseon Dynasty (1392-1910) pulled off against Japan during the country's Invasion of Korea (1592-1598).

It is set five years before the Battle of Myeongnyang, featured in "Roaring Currents" (2014), the first film of Kim's trilogy. The third and final one will be "Noryang" about the final battle of the seven-year war in 1598, when Adm. Yi was shot to death. 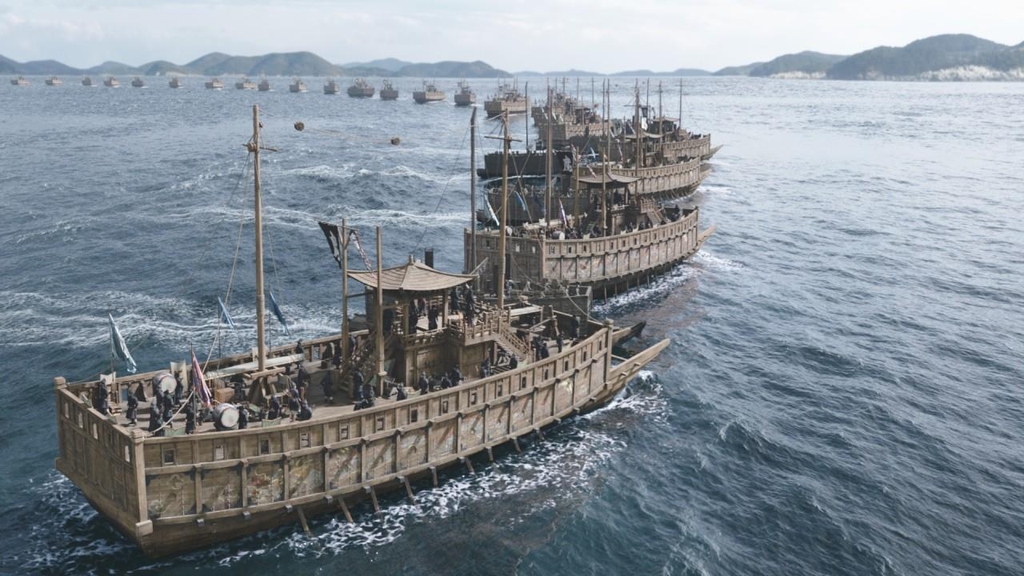 "'Roaring Currents' is about the heart-pounding upset that turned the tide of the war. I thought that is the perfect one to start the trilogy," Kim said in a press conference. "And in the second film 'Hansan,' I want to show Admiral Yi in a deeper, wider way."

"Roaring Currents" is the most-watched film in the Korean box office with more than 17 million moviegoers.

He said he put a lot of effort into actualizing the admiral's signature armored warship, named Geobukseon, or also known as turtle ship, which played a major role in the Battle of Hansan.

Adm. Yi assumes a U-shaped crane-like formation with large warships in the center and lighter ships on its wings to trap the Japanese vessels, using Geobukseon to make a rush at the enemy's fleets from the center.

The director pointed out that many Korean people are well aware of the turtle ship but don't know how it looks like exactly.

"I've collected many historical materials and research to create one in a way to make this battle more conceivable and plausible," he said. "And the spectacular battle scenes continue for 51 minutes. It will be worth watching." Lead actor Park Hae-il said he felt great pressure to take the role of the national hero that every Korean knows when he got the offer from director Kim, with whom he worked on two titles, including the period action film "War of the Arrows" (2011).

But his character in "Hansan" is not only a warrior but also a scholar and strategist with honesty, strategic vision and intelligence, who leads the largest naval triumph during the Joseon-Japan war.

"The Battle of Hansan Island is not a narrow win but a great victory for which Admiral Yi has been thoroughly prepared for a long time," he said. "I hope viewers feel the thrill of victory from 'Hansan' this summer."

"Hansan" will be released on July 27.