SEOUL, June 28 (Yonhap) -- With the whole nation in the middle of the annual monsoon season, heavy downpours reaching up to 300 millimeters are forecast to pound the central region, including the Seoul metropolitan area, between Tuesday night and Thursday morning, the state weather agency said.

The Korea Meteorological Administration (KMA) said 100 mm to 200 mm of monsoon rains are expected to soak the capital area and almost all parts of the central region, including Gangwon and Chungcheong provinces, until early Thursday.

The precipitation may reach up to 300 mm in some mountainous districts in the central region, the KMA said. 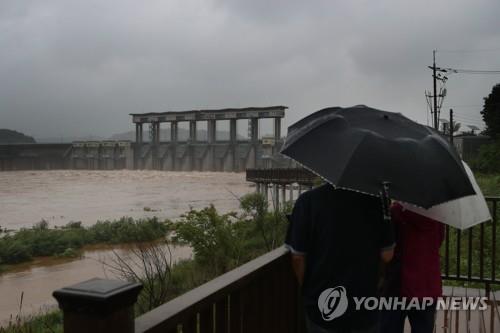 The amount of rainfall forecast in the southern regions and on Jeju Island until Thursday ranges from 5 mm to 80 mm.

The KMA said heavy downpours are expected to hit the Seoul metropolitan area, western parts of Gangwon Province and northern parts of Chungcheong provinces between Tuesday night and Wednesday morning, while the monsoon rain belt is expected to move south toward Wednesday night.

Between Wednesday night and Thursday morning, the central region will again be hit by torrential downpours, which will be far heavier than the previous night's rainfall, the agency said.

The KMA said the atmospheric conditions on the Korean Peninsula will remain highly volatile for the time being, as tropical disturbances are developing in the South China Sea and the Philippine Sea.