SEOUL, June 28 (Yonhap) -- The main opposition Democratic Party (DP) on Tuesday submitted a request to call an extraordinary session of the National Assembly amid an impasse in negotiations with the ruling People Power Party over how to share parliamentary committees.

The request was seen as a move to press the ruling party to make concessions in the stalled negotiations to form parliamentary committees, with a threat to use its majority power to open an extra session, and select the speaker and vice speakers of the Assembly on its own.

The DP currently holds 170 out of 299 assembly seats. By law, an extra session can be convened three days after a request was submitted, which means a new session can begin on Friday.

The impasse in committee formation negotiations has left the Assembly idling for almost a month after the first half of the 21st National Assembly ended last month.

In an effort to break the deadlock, the DP offered last week to hand over the chairmanship of the judiciary committee, a key Assembly panel that has the power to approve bills before they are put to a plenary vote, to the PPP in exchange for the PPP's cooperation for the launch of a special committee on judiciary reform.

But the PPP rejected the proposal because the special committee is aimed at completing the process of reducing and ultimately abolishing the prosecution's investigative powers in accordance with recently enacted prosecution reform laws, which the ruling bloc has opposed. 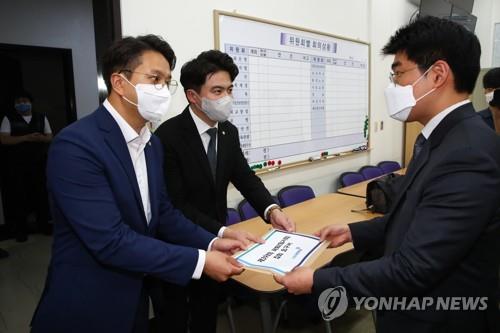