Park Sang-hak, head of the Fighters for a Free North Korea, told Yonhap News Agency that his group released 20 huge balloons carrying 80,000 pain reliever pills, 30,000 vitamin C tablets and 20,000 masks toward the North from Incheon's Ganghwa Island, some 60 kilometers west of Seoul, between 10 p.m. and 11 p.m. on Tuesday.

Park disclosed several photos to back up his claim. 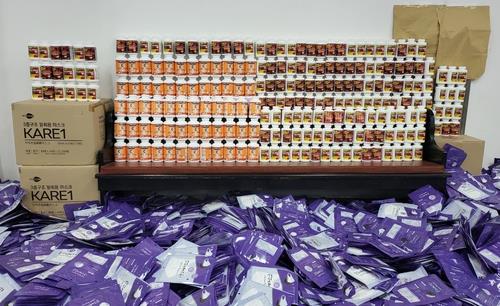 One banner attached to a balloon read, "With the sincerity and support of the Korean people and Korean Americans, we send you medicine to treat malignant infectious diseases," while another said, "Let's save the North Korean compatriots abandoned by (North Korean leader) Kim Jong-un."

The group recently announced it would temporarily stop sending anti-Pyongyang leaflets across the border aboard large balloons in order to focus on delivering medicine for COVID-19 to the North, following news reports about the spread of the pandemic in the isolated country.

It claimed early this month that COVID-19 medicine was sent to the North aboard 20 big balloons on June 5 from a location in Pocheon, around 40 kilometers northeast of Seoul.

Park was already booked by police on charges of sending 20 big balloons carrying propaganda leaflets, including those on the news of Yoon Suk-yeol's election as South Korean president, to North Korea from Gimpo, just west of the capital, on April 25-26 in violation of the Development of Inter-Korean Relations Act.