MADRID, June 29 (Yonhap) -- President Yoon Suk-yeol called on the international community Wednesday to show that its resolve to denuclearize North Korea is stronger than the North's determination to develop its nuclear and missile programs.

Yoon made the remark during an address at the summit of the North Atlantic Treaty Organization (NATO) in Madrid, according to an official from the presidential office.

Yoon is the first South Korean president to attend a NATO summit. 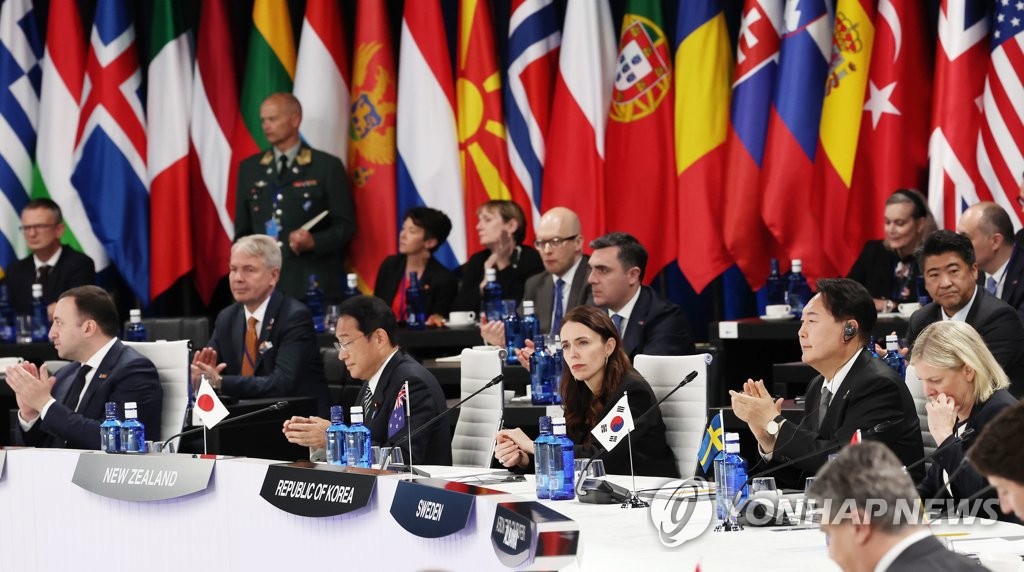 "In order to pull North Korea onto the path of denuclearization, we must show clearly that the international community's will to denuclearize (the North) is stronger than its reckless will to develop nuclear weapons and missiles," the official quoted Yoon as saying.

"North Korea's nuclear and missile programs are a clear violation of U.N. Security Council resolutions," Yoon added, also calling them a "serious challenge" to peace on the Korean Peninsula and in the world.

"The Republic of Korea and NATO have developed their security cooperation in the political and military spheres since establishing a global partnership in 2006," Yoon said.

"Now, as a country with the capability, the Republic of Korea will fulfill a bigger role and responsibility," he said, citing economic and cyber security as areas where he hopes to see close cooperation with NATO states.

In apparent reference to Russia's war in Ukraine, the president noted "moves to deny the universal values that we have defended amid the creation of a new structure of rivalry and conflict."

"Freedom and peace are guaranteed through solidarity with the international community," he said. "I hope the cooperative relationship between South Korea and NATO will become a cornerstone for such solidarity."