Yoon arrived in Madrid on Monday on his first overseas trip as president, and launched into a series of bilateral and multilateral meetings before attending the North Atlantic Treaty Organization (NATO) summit Wednesday. 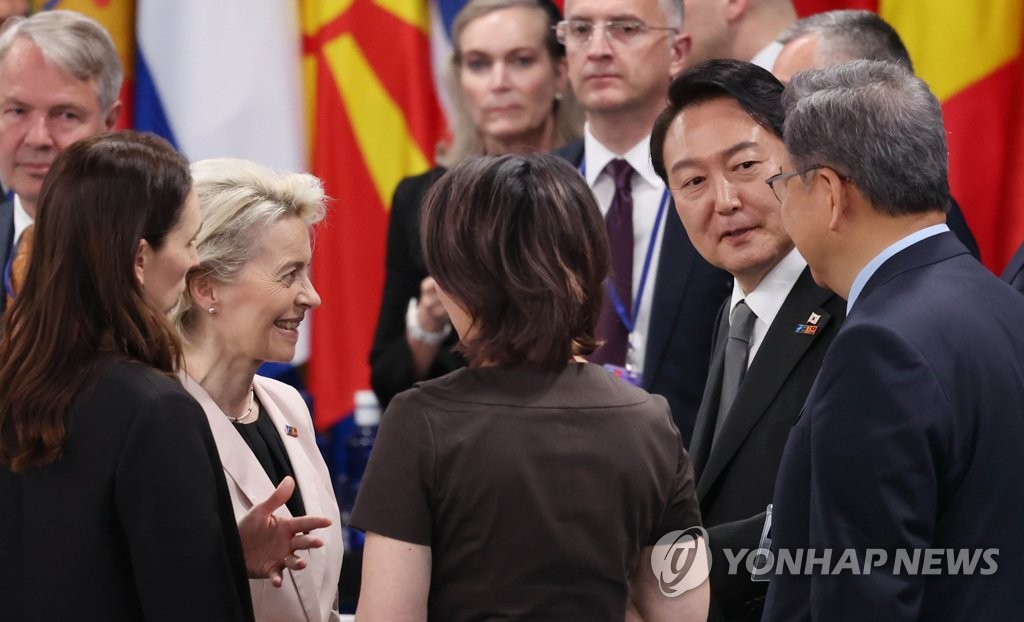 Though it was not planned, Yoon's brief encounter with Japanese Prime Minister Fumio Kishida on Tuesday generated much publicity as it demonstrated the two leaders' commitment to improving bilateral ties badly frayed under Yoon's predecessor, Moon Jae-in.

Yoon and Kishida met three more times Wednesday, including in a trilateral format with U.S. President Joe Biden, leading to hope it could be the beginning of a concerted effort on both sides to resolve historical disputes, including the issues of wartime sex slaves and forced labor.

"I came away confident that Prime Minister Kishida will become a partner in resolving issues between South Korea and Japan, and in developing bilateral ties for the two countries' future common interests," Yoon told reporters.

The trilateral summit with Biden -- the first such meeting in nearly five years -- also signaled the restoration of a partnership that is key to deterring North Korea's nuclear threats and keeping China in check.

The emphasis on rules was widely viewed as an indirect criticism of China's growing military and economic assertiveness in the world.

North Korea featured prominently in Yoon's meetings with world leaders, including in his speech to NATO members and partner nations Wednesday.

In the speech, he said the international community must show that its will to denuclearize the North is greater than the regime's will to develop its nuclear weapons and missile programs.

During bilateral meetings, he repeatedly emphasized the importance of dealing firmly with North Korea's provocations but leaving the door open to dialogue.

There were three key economic themes that ran through Yoon's trip, according to presidential officials.

"Sales diplomacy" was one, with the president focusing on promoting the export of South Korean nuclear power plants and weapons.

With Poland, for example, South Korea is in talks to sell weapons systems, such as the FA-50 light combat aircraft and the K2 Black Panther battle tank.

Strengthening advanced industry supply chains was another theme, which was addressed during Yoon's meeting with the Dutch prime minister, as the Netherlands is a strong player in semiconductor equipment.

The final theme was building a foundation for cooperation on future growth industries, such as space.

During Yoon's meeting with French President Emmanuel Macron on Wednesday, the two sides agreed to strengthen cooperation in the space industry.