GWANGJU, June 30 (Yonhap) -- Police investigating the mysterious deaths of a 10-year-old girl and her parents found in a car sunk in waters off the southwestern coast said Thursday they have failed to determine the exact cause of their deaths after an autopsy.

The National Forensic Service performed forensic autopsies on the remains of Cho Yu-na, a Gwangju elementary school student, and her parents in their 30s but said the cause of their deaths cannot be determined, according to the Gwangju Nambu Police Station. 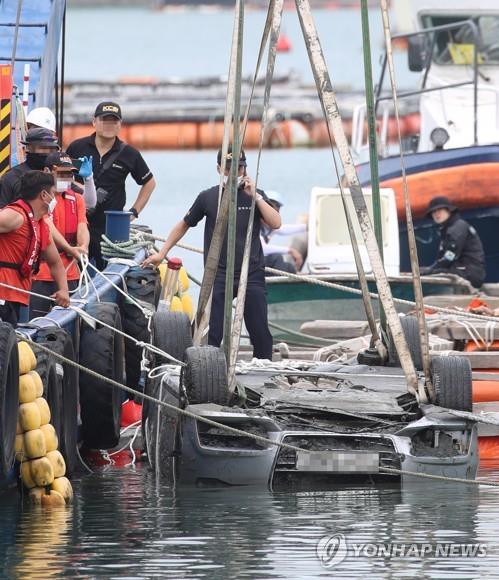 The forensic agency added that drowning cannot be ruled out, though it cannot be confirmed, the police station said.

Cho and her parents, who resided in the southwestern metropolitan city of Gwangju, were found dead on Wednesday inside their family car pulled out of waters off Wando, a quiet island about 120 kilometers south of their home. The family went missing about a month ago after last being seen alive on CCTV at a Wando guesthouse on May 30. Cho's school filed a missing persons report on June 22 and police conducted a weeklong search for the family.

Police said that the cause of the family's deaths may have not been confirmed because the bodies were submerged in water for a long time, adding that signs of external injury or disease were not found.

Police said they plan to conduct body plankton, toxicology and drug tests on the family's remains. The body plankton test, for example, will likely be helpful in determining whether the family died before or after entering the water, they explained.

Police said they expect the comprehensive examinations to take about a month.

Police also plan to look into the possibilities of the family car having had a crash accident or mechanical defect.