SEOUL, June 30 (Yonhap) -- Actress Jeon Jong-seo said Thursday she will not forget the opening sequence of the latest crime drama "Money Heist: Korea - Joint Economic Area," where she dances to a song by K-pop boyband BTS.

The Korean remake of the smash-hit Spanish series is Netflix's latest Korean-language original series set on the Korean Peninsula in 2026, when the two Koreas establish a joint economic area (JEA) as a first step toward unification.

The first episode opens with teenage Tokyo, a North Korean student played by Jeon, dancing to the lyrics of BTS song "DNA" on her headphones while walking down a staircase in Pyongyang.

"I practiced it a lot. I danced far more and longer than the scenes shown in the series," Jeon said in a media interview. "I felt a bit embarrassed when filming that sequence, but I don't think I'll ever forget this scene." 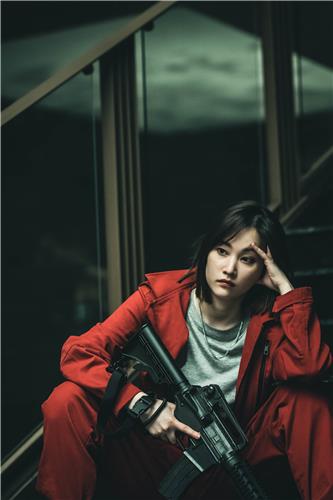 Jeon, who made her impressive silver screen debut with the thriller "Burning" (2018), said the eye-catching opening sequence features Tokyo, who is just an ordinary teenage North Korean girl with a longing for South Korea's prosperity.

But she later falls into the hands of the loan sharks in Seoul, where she hopes to settle in pursuit of the "Korean dream."

"She gets frustrated and hurt. Everything in the South goes beyond her expectations," she said. "A man called Professor comes to her and lends a helping hand when she is on the verge of death."

So Tokyo takes part in a great plot masterminded by Professor (Yoo Ji-tae) to overtake the mint at a joint economic area, which is an economic symbol of unification on the Korean Peninsula.

Jeon said her character, who also serves as the narrator of the series, is the character that is changed most in the Korean version from Tokyo played by Ursula Corbero in the Spanish original.

"In the original, Tokyo is a troublemaker who is suggestive, sexy and wayward. Very attractive," she said. "But the Korean Tokyo is very loyal to Professor, reasonable and tries to see situations with a calm and cold-headed eye."

The 27-year-old actress, a big fan of the Spanish version, said she was surprised with the huge change in the characteristics of Tokyo when reading the script for "Money Heist: Korea."

"It wasn't easy for me to portray the newly-created character and make my own point there," she said. "But this is not a show led only by Tokyo. So I focused more on creating the on-screen ensemble of the entire cast." 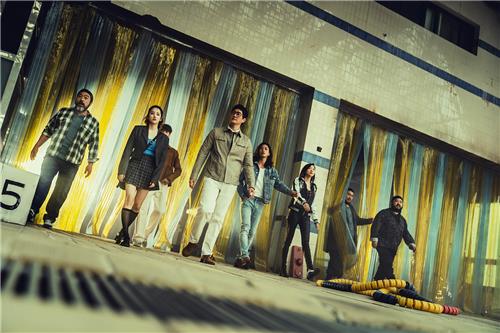 Released last Friday, the Korean version of Spain's "Money Heist" debuted at No. 1 on the streamer's latest weekly viewership chart of non-English TV shows. It had also placed second on a daily global chart for TV programs on Netflix released by streaming analytics company FlixPatrol as of Wednesday.

Jeon, who also starred in Hollywood film "Mona Lisa and the Blood Moon" (2021), thanked global audiences for the popularity of her first TV series and said she tries to remain aloof from reviews or viewership ratings every time she appears in a film or TV series.

"I'm not bothered by such responses or successive runs of my shows," she said. "I just want to star in films or TV shows that many people love."