The 190-square-meter space is filled with the latest retail technology developed by the company. Customers can purchase products using their face, get information on wine at the touch of a palm and watch customized advertisements recommended by artificial intelligence, which can recognize a person's gender and age through its sensors.

After midnight, the store operates completely without staff, and customers have to verify their identification with a credit card or through mobile identification methods before entering the store.

"I find it very convenient, because I can verify my ID with just my credit card. No need to download an app or go through multiple steps. I could see this being applied to other stores, especially those hoping to reduce labor costs," said a 42-year-old software developer surnamed Hong, who stopped by the GS25 store around 1 a.m. Thursday to buy snacks on his way back to work. In recent years, South Korea's convenience store industry has been beefing up its IT prowess through "smart" stores. Starting with 7-Eleven in 2017, BGF Retail opened a "tech-friendly" CU store in Incheon in January of 2021.

A few months later, Shinsegae Group opened an Emart 24 smart store in southern Seoul that resembles Amazon Go. There, customers can walk in, pick out what they want and leave, while the store automatically detects the products and bills them through a registered credit card.

Industry officials said the rapid increase in South Korea's minimum wage is to blame for such a trend. The country's minimum wage rose by 41.6 percent from 2017 to 2022, and many store owners started replacing their part-time staff, especially night shift workers, with self-service kiosks to reduce labor costs.

Last month, representatives of South Korea's labor and management agreed to set next year's minimum hourly wage at 9,620 won (US$7.4) in a 5 percent increase from this year.

"The rapid increase in minimum wage has put a burden on store owners, especially during their night operations. Many shifted to what we call a 'hybrid model' that operates without human staff during certain hours," a spokesperson from 7-Eleven said. 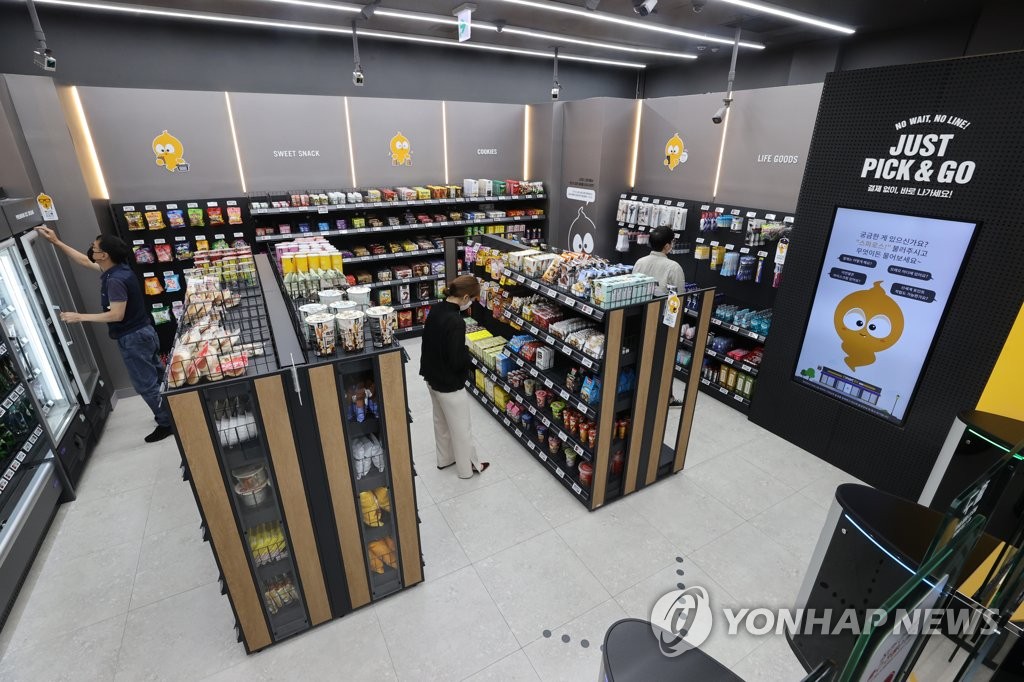 A boon in unmanned stores and contactless services since the pandemic also had an effect, they explain. As of May this year, there had been some 2,643 convenience stores operating in a "hybrid" form, according to CU, GS25, Emart 24 and 7-Eleven.

While the technology is there, it's a long journey ahead until stores can go entirely staff-free, industry insiders say, since physical stores will always need a human staffer to manage inventory, keep the place clean and answer customer inquiries.

Cost is another hurdle. A completely automated store, like Emart 24's Smart Store and Amazon Go, where customers are able to purchase products without being checked out by a cashier, require at least 10 times the cost to open regular stores, explained GS Retail official Hwang Joon-seok.

"But we expect digitization to continue in the long term. These smart stores exist to test these technologies and reduce errors before they are commercialized," Lim Soo-bin, an official from Emart 24, said.